Robotic thymectomy gives patient something to cheer about 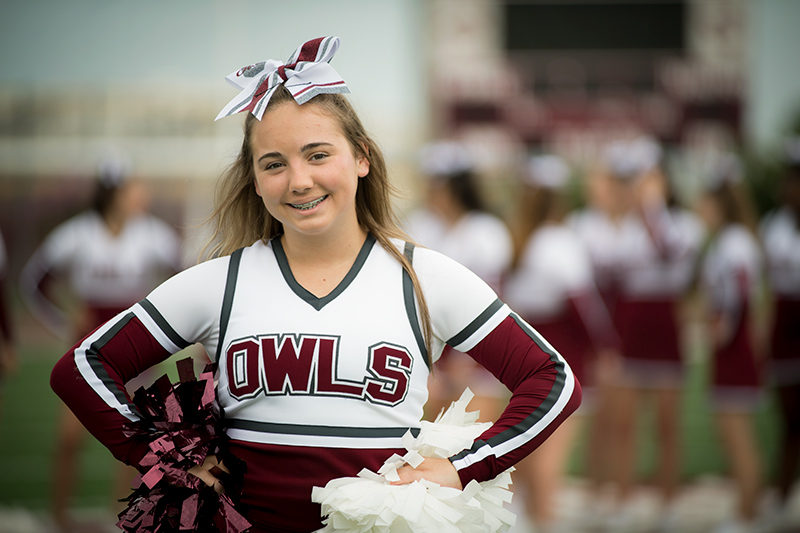 One month post-surgery, Alexis Resendez was back on the field tumbling and cheerleading. (Photo by Paula Burch-Celentano)

Brandi Resendez's 14-year-old daughter, Alexis, started complaining of a sore neck a year ago. Resendez first thought it might be all the work Alexis was putting in preparing for high school cheerleading tryouts, but the pain continued to get worse. Alexis also started to lose weight because it hurt to eat, and she was exhausted all the time. A trip to the emergency room revealed a mass in Alexis' chest near her thyroid gland, and she was referred to Dr. Emad Kandil, chief of endocrine surgery at Tulane University School of Medicine.

Kandil performed the first-ever robotic thymectomy in the world, using a single incision under the armpit. Thymectomy is a surgical procedure to remove tumors from the thymus, a gland located at the base of the neck that produces T cells. Traditionally, surgeons had to split the breastbone to remove the thymus, requiring a long incision in the chest and leading to more recovery time for the patient.

Kandil is a pioneer of performing thyroid surgeries in the same way. He uses a robotic surgery system that provides a detailed 3-D magnified view of the anatomy around the thyroid, which enables him to perform precise surgery through a single incision. Using this minimally invasive approach, patients heal faster, and many are able to go home the same day.

In Alexis' case, Kandil was able to use robotic thymectomy to remove the tumor from her thymus gland. He removed the chest mass through a hidden incision under the armpit.

"When Dr. Kandil came in that waiting area and told me he was able to remove the whole mass, I remember jumping up and hugging him," Resendez said. Alexis went home the following day, quickly showing signs of improvement. A month later, the teen was back to tumbling and, shortly after that, she tried out for the cheerleading squad.

She made the team.

"Alexis is like a whole different kid," said Resendez. "She is doing so well, she does not complain about pain, she has so much energy. Her cut under her arm is getting lighter and lighter, and it healed very well.

"I hope that every hospital will be able to get a robotic machine, but I know that Dr. Kandil is the best using the machine," she said. "He can't be at 10 hospitals at the same time, but if you are lucky enough to have him teach people how to accomplish what he did on my daughter, people will recover so quickly from surgery.”