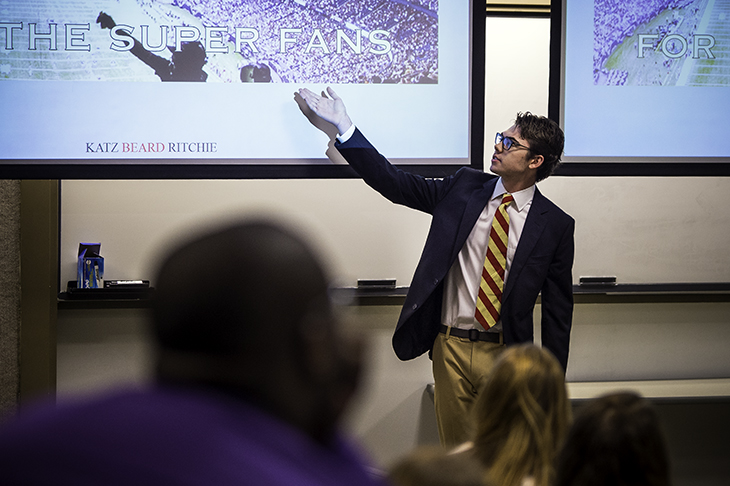 Hamilton Beard explains his group's billboard during a presentation before representatives of the Greater New Orleans Sports Foundation and his fellow classmates in management communications (MCOM 3010). (Photo by Ryan Rivet)

During the May 2016 NFL owners’ meeting, votes will be cast for the 2019 and 2020 Super Bowl host cities. When that happens, students in one Tulane University business school class will be paying close attention.

As part of the final assignment for Management Communication (MCOM 3010) taught by professor of practice Ashley Keller Nelson, students worked in groups to form full communications plans for one of four finalist cities including Atlanta, Miami, Tampa Bay and New Orleans. Students were asked to create a plan as if their assigned city was awarded the Super Bowl.

On the final day of class when the New Orleans groups were to present, employees of the Greater New Orleans Sports Foundation were present to soak up — and critique — their novice advice. The sports foundation will have the same task as the students’ hypothetical of presenting the news to residents of the city if New Orleans’ bid is successful.

“These presentations are impressive. We’ll probably steal some of those billboard ideas for sure.”

“To be successful, one must analyze the stakeholders in order to understand who they are, what they need to know, and what is the best medium to use to reach the audience,” says Nelson about what she wants the students to take away. “In the end, students learn how to write a research paper, work in a team and how to give a professional team presentation.”

From the sports foundation were Jeff Rossi, director of event sales and Paul Utterback, communications manager. They sat. They watched. They took notes.

“Our staff works directly with the mayor’s office on things like public safety, permits and the 20,000 hotel rooms required to be available,” Rossi says. “These presentations are impressive. We’ll probably steal some of those billboard ideas for sure.”

Utterback says the pitch for New Orleans began in November of 2015 and is now complete. The NFL vote on Monday, May 23 is all that remains.