An article co-authored by a Tulane scientist examines the role that groundwater plays in eroding the surface of the earth  a dynamic that could have implications for New Orleans-area levees. 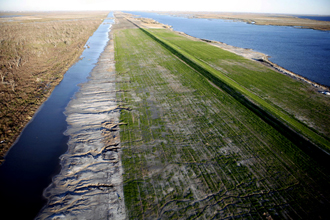 Seepage caused by underground flow of water is the likely cause of the network of channels scouring the levees along the Mississippi River-Gulf Outlet Canal, a Tulane scientist says. (Photos from Kyle M. Straub)

The March issue of Nature Geoscience features on its cover an article co-authored by Kyle M. Straub, an assistant professor in the Tulane Department of Earth and Environmental Sciences. In the article, Straub and his colleagues theorize how erosion from groundwater seepage contributes to the growth of arterylike networks of channels on the earth's surface. A colorful illustration of the channel effect is on the front cover of Nature Geoscience.

Through fieldwork conducted in the Florida Panhandle, the team of researchers was able to analyze mathematically the progress of seepage erosion, which occurs when the water held beneath the ground's surface reemerges to shape the earth's topography. By measuring the shape of the groundwater table at the leading tip of a channel, the scientists were able to test numerical models predicting the channel's future growth.

Straub says the team's theory for the growth of seepage-driven channels could be applied to the levees along the Mississipi River Gulf Outlet, which are scored by fingerlike seeping channels.

“Our theory would suggest that seepage caused by underground flow will continue to erode and weaken the levee system, but the rate of this erosion should gradually slow with time,” says Straub. “Hopefully this research will aid the U.S. Army Corps of Engineers in identifying levees that need repair and assessing the lifespan of structures like the MRGO that are not planned for upkeep.” 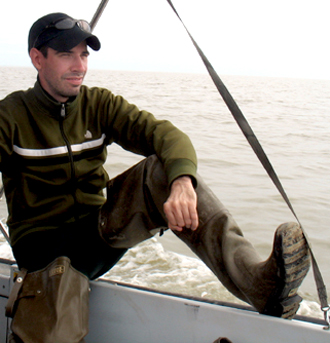 How groundwater contributes to changes in topography is examined in new article co-authored by Kyle M. Straub, assistant professor in earth and environmental sciences.

The Mississippi River Gulf Outlet (MRGO), which extends for 76 miles from New Orleans through wetlands to the Gulf of Mexico, has caused the erosion of thousands of acres of cypress wetlands and marsh since its opening in the mid-1960s and has been blamed for increased storm surge during Hurricane Katrina in 2005. In late January, the U.S. Army Corps of Engineers began work to close the shipping channel.

The paper suggests that the velocity at which channel heads advance is proportional to the flux of groundwater to the heads. The researchers used field observations and numerical modeling to develop with the theory. To demonstrate how it works, they created computer animations depicting how a network of deep ravines in Florida grew over time.

Straub says that growth laws for seepage-driven channels is a subject of interest within his field because they describe the important role of seepage in sculpting landscapes. Through numerical modeling and computer animation, researchers were able to depict the process taking place in the Apalachicola Bluffs and Ravines Preserve in Florida.

“The animations provide an explicit answer to the age-old question of how particularly striking and visually attractive erosional features on Earth's surface attained their modern form,” explains Straub.