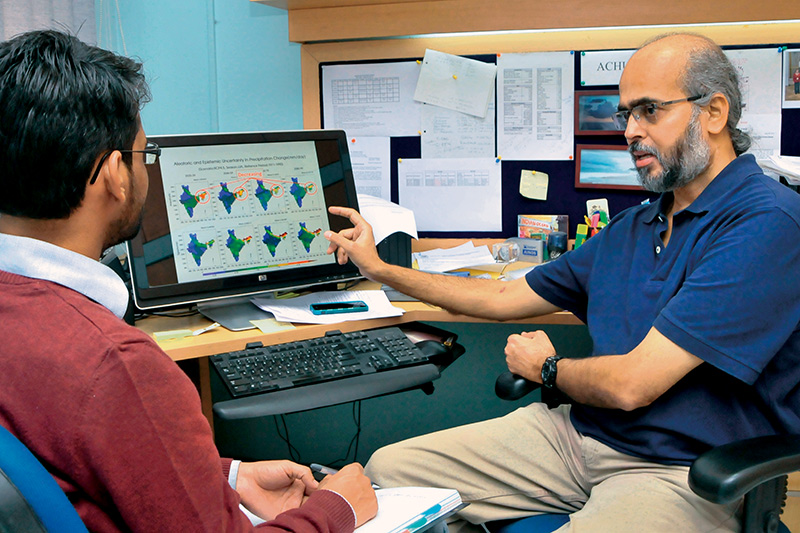 Krishna AchutaRao (right) is associate professor in the Centre for Atmospheric Sciences at the Indian Institute of Technology Delhi. (Photo from Khrishna AchutaRao)

As part of the Intergovernmental Panel on Climate Change, Tulane alumnus Krishna AchutaRao received the Nobel Peace Prize in 2007, along with Al Gore. The award recognized their combined efforts to disseminate greater knowledge about man-made climate change and to lay the foundation for counteracting it. Nearly a decade later, according to the prizewinner, who lives in New Delhi, there is even more evidence now that we have fundamentally altered the climate on planet Earth.

“We now have a fairly precise accounting of where the extra heat that is being trapped has gone …  into the oceans, melting our ice caps and warming the atmosphere. Not only have temperatures gone up worldwide, but numerous extreme or freakish weather events would convince even a layperson that something is awry with our climate.”

AchutaRao is associate professor in the Centre for Atmospheric Sciences at the Indian Institute of Technology Delhi.

“My job is to simplify complicated climate information and make it useful to decision-makers, so we can effect change now.”

Despite overwhelming evidence pouring forth from the scientific community, climate change is still controversial: Naysayers contend that a winter temperature rise of 4 degrees is a good thing if you live in Minnesota or other cold climates. Others maintain that climate is cyclical, and we’re simply entering a warming phase. But a recent global carbon dioxide overload, caused by burning fossil fuels like coal, oil and gas, produces heat-trapping gases, and has a decidedly negative overall impact.

“Climate change will certainly have some short-term winners … if you live in Canada or Siberia, and can now support agriculture. But there will be a whole lot more losers in this equation. The unavailability of water may make a place uninhabitable. And with sea-level rise, and half the world’s population living within 35 miles of the seas, you’ll see inordinate numbers of people totally displaced. Certainly climate change is cyclical, but what used to occur over tens of thousands of years, we are now seeing in under 200 years. The pace is staggering, and humans just cannot respond fast enough.”

AchutaRao believes we need to control the release of greenhouse gas emissions or endure the consequences.

“Renewable energy sources like wind and solar are the first step,” says the professor, “but we need brand new technology to reverse the damage already done. My job is to simplify complicated climate information and make it useful to decision-makers, so we can effect change now.”

Passion for the game
Digging up the past
The More You NOLA: Off the wall
Location information
Fielding Dreams, Part III