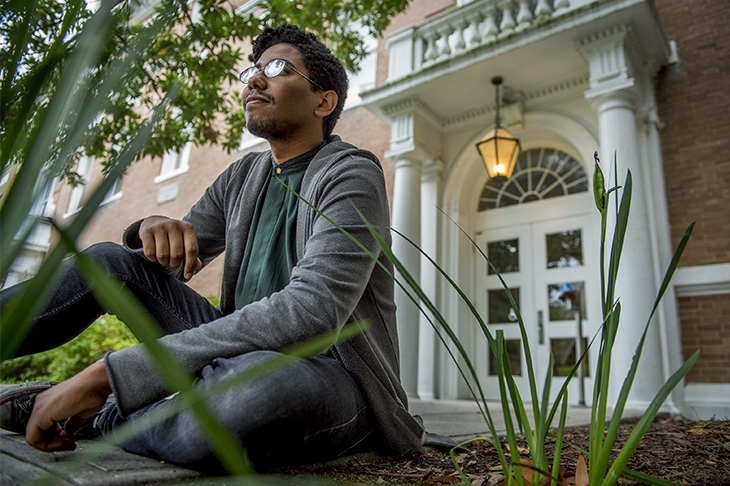 Preston Mills graduates on May 14, 2016, with bachelor’s degrees in mathematics and sociology. (Photo by Paula Burch-Celentano)

When Los Angeles native Preston Mills arrived on the campus of Tulane University, he noticed several groups of people that seemed distant and isolated. He knew immediately that he wanted to do something to help them.

Mills, who will be among those graduating on May 14 at the Unified Commencement Ceremony, says he was lucky to have arrived as a Posse Foundation scholar — a program that brings together groups of talented students, carefully selected and trained, to attend college together to help increase individual and community development on their campus.

“Posse has meant being a part of a group of individuals who change your life and push you to be greater just by being in their presence,” says Mills.

“I hoped to create spaces in which genuine support could flourish.”

During his college career, Mills has worked on behalf of underrepresented students on campus by being an Office of Multicultural Affairs ambassador and helping found the Queer Feminist Collective, Gender and Sexuality Advisory Council. He cherishes most an organization he founded, the Finding Intersectionality Together Leadership Retreat, which focuses on discussions about social justice and identity, emphasizing student leadership.

“We explore the nuances of social justice issues and incorporate student leadership by having students lead breakout workshops,” Mills explains. This year the group raised more than $4,000 for the retreat.

In the future, Mills plans to attend graduate school to pursue a doctorate in mathematics.

“My career goal is to utilize mathematics to describe the complexity of the world around me,” says Mills. “I want to be able to use my capacity as a mathematician to expand the way we use quantitative analysis to inform policy.”

Mills hopes to synthesize his own method for using math and science to help society in a positive and revolutionary way.

Claire Davenport is a sophomore at Tulane University, majoring in English and political science.