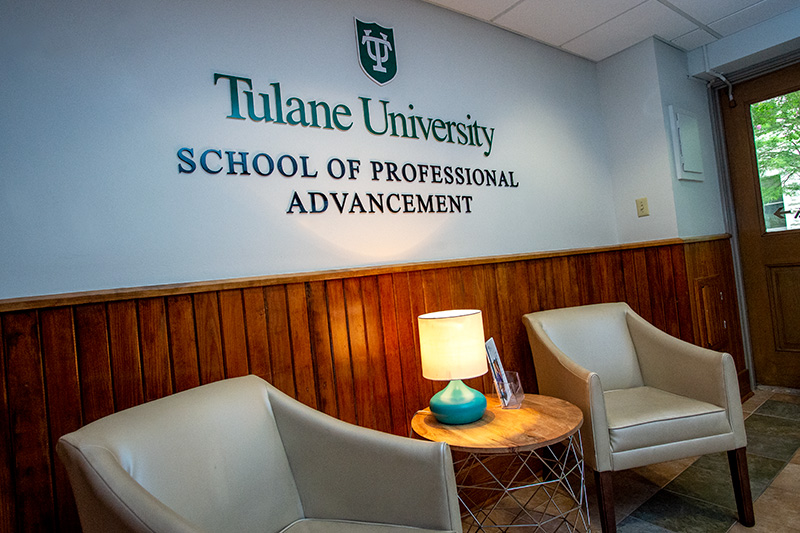 An agreement between Tulane and Delgado Community College allows Delgado graduates to complete a bachelor’s degree in Tulane’s School of Professional Advancement. (Photo by Paula Burch-Celentano)

Tulane University has created an additional pathway for students in the New Orleans community to attend the university through an agreement with Delgado Community College. The agreement provides Delgado graduates an opportunity to complete a bachelor’s degree in Tulane’s School of Professional Advancement (SoPA).

The partnership allows Delgado graduates who complete an associate of arts Louisiana Transfer (LT) degree in business, criminal justice, humanities, social sciences or associate of science LT in physical or biological sciences to transfer up to 60 credit hours toward the completion of a degree at Tulane through SoPA. Eligible students can complete their bachelor’s degree through SoPA’s programs in exercise science, general legal studies, digital design, information technology, public relations, health and wellness, homeland security studies, humanities and social sciences.

Students who complete Delgado degrees in fields other than those specified in the agreement will have their coursework individually evaluated for transferability.

“This relationship with Delgado opens the door to more students in the New Orleans community and provides them the opportunity to earn a bachelor’s degree from Tulane,” said SoPA Dean Suri Duitch. “This is a great option for local students who work hard, and are smart and ambitious. Whatever pathway life takes them on, they have a place at Tulane, and this is one of the ways they can get here.”

Administrators, advisors and staff from both institutions work closely together and communicate the partnership to interested Delgado students to make a seamless transition from one school to another and to establish a personal connection to the institution for the students.

“For those Delgado students who want to continue their education, we want them to know SoPA is an option for them,” said Ilianna Kwaske, SoPA’s associate dean for academic affairs. “We certainly hope to recruit more Delgado students as a result of this partnership. I also think this partnership raises awareness of the educational opportunities available for working adults at SoPA, from undergraduate degrees to graduate degree programs and certificates. Ultimately, we want all our students to be successful in their education and prepared to move forward in their careers.”

Building on Tulane’s strong relationships with industry leaders in the New Orleans community, SoPA develops programs that ensure its graduates have the relevant knowledge and skills to meet the standards of local industries. Through this partnership, working adults build academic and professional connections with local businesses and organizations, which can lead to professional opportunities in high-demand careers.

“We have had many Delgado alumni continue their academic journeys at SoPA and move on to important professional roles in local and national businesses, governments and organizations,” said Delila Omerbasic, SoPA prior learning coordinator and a professor of practice. “Our goal is to ensure that students who are earning a Louisiana Transfer degree at Delgado and planning on transferring to four-year universities have a clear pathway to completing their bachelor’s degrees at Tulane SoPA.”

In 2018–19, Tulane’s student body boasted 2,669 students from Louisiana, including 2,092 from the New Orleans metro area. The majority of Delgado’s 14,258 in-state students comes from Orleans and Jefferson parishes. Eric Lane is a great example of a local student who has made the most of the partnership between Tulane and Delgado, which are located just 5 miles apart.

Lane first earned his associate’s degree at Delgado and recently graduated with his bachelor’s degree from Tulane. Lane’s college path was filled with adversity; however, he persevered and received his degree from SoPA in information technology with a concentration in cybersecurity and homeland security and a minor in political science. Lane plans to take a position with a federal agency.

“I chose Delgado because the two-plus-two agreement would allow me to transfer to Tulane and finish out my four years,” Lane said. “So, that made my college decision pretty easy. It's vital for the local community to have the ability to go through a program like SoPA, especially for people that have been out of school for a while. It's a daunting thing to go back to school after being out for a period, but this program makes it a little easier.”