Supporters rally around Tulane students as they await return to campus 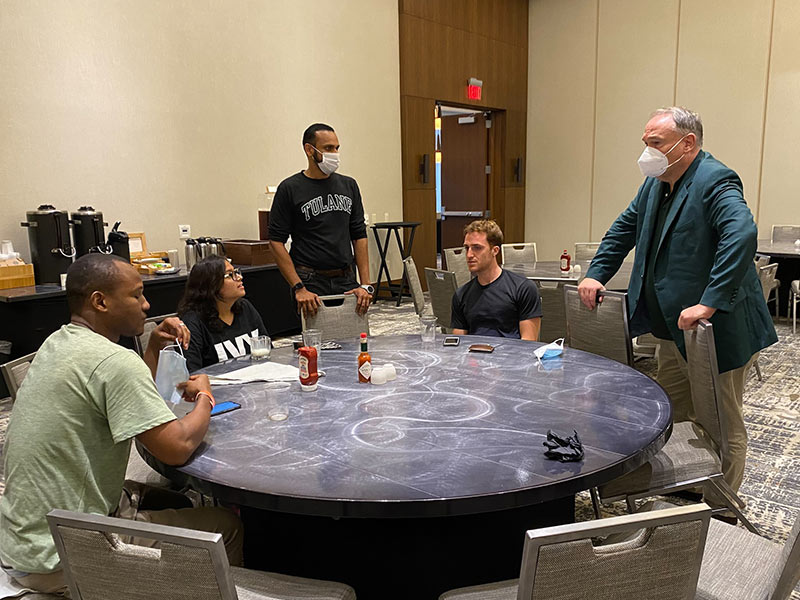 When more than 2,250 Tulane students relocated to Houston after Hurricane Ida they arrived with a host of questions, challenges and unique needs.

Some international students, for instance, faced a unique challenge: opening bank accounts without the proper identification to prove that they have an American address. Tulane’s staff members assisted these students, who will soon begin returning to campus.

Being away from home can cause many uncertainties and one-of-a-kind problems, such as access to banking and traveling expenses, but Tulane’s Student Affairs staff is prepared to support students. “We are extremely proud of our students and the entire Tulane community for making the best out of a very challenging experience,” said Laura K. Osteen, assistant vice president for Campus Life in the Office of Student Affairs at Tulane University.

International banking is one area that is not easily fixed without help, especially when considering additional hurdles like language barriers.

“I was so relieved when I found out that Tulane was helping us to evacuate because I don’t have a car and I couldn’t fly out because the airport was closed — but when I arrived in Houston, I couldn’t access any money,” Zhang said. “My parents had planned to wire money once I got set up with a bank account here, but I didn't have enough time to get one and none of the banks I went to in Houston could help because I don’t have an ID yet to prove that I have an American address.”

After multiple unsuccessful attempts to open an account in Houston, Zhang reached out to Shannon Woodward, one of several dozen Tulane administrators in Houston who are in place to support students with financial concerns, housing and transportation.

“Most of the students brought licenses and passports but evacuated without things like a copy of their lease, which made it nearly impossible to open a bank account due to no proof of address, and we didn’t have access to our system either because of the power outages,” said Woodward, senior philanthropic advisor in the Office of Advancement at Tulane University.

Woodward knew that other students may have similar challenges. After contacting several local banks in Houston that couldn’t open bank accounts for international students under the circumstances, Woodward called Carl Chaney, the former CEO of Hancock Whitney Bank.

“I reached out to him and then Shane Loper, the COO, got involved — and then they started calling other people that they knew. Before you knew it, we had an entire team of people from Hancock and they found a way to get these students exactly what they needed,” Woodward said.

Several other organizations have also reached out in an effort to assist Tulane students in need, including Iberia Bank and H-E-B Grocery Company.

Both hotels where students are currently being housed, the Hyatt Regency Downtown and the Hyatt Regency West in Houston, added capacity to their wireless networks and opened up space throughout the hotel so students can fully participate in online classes, which began Monday.

“I think Student Affairs has done an outstanding job making sure that the students’ needs are being met,” said Brian Lowe, director of transportation and parking at Tulane University. “You’ve got staff members manning the desk early morning into the late evening hours, they’ve got emails going out and we’re trying to do everything we can to keep students from going stir crazy in the hotels by giving them options to go out into the city and go shopping or anywhere they need to go including banks, dentist appointments, pharmacies, museums, and various grocery stores and entertainment venues.”

Rice University, the University of St. Thomas, and the University of Houston also stepped up to provide shuttle service for Tulane students traveling to various airports in Houston “for multiple days, like 12-hour days, these universities were amazing!” Lowe added.

“Initially, we ran shuttles to the airport starting at 5:30 in the morning, until around 10 o’clock at night, for three straight days. That’s all we did is transport students to either Hobby or Bush airport. I am especially proud of how the Tulane shuttles and transportation staff have stepped up to provide transit services all over the city of Houston for Tulane students for more than 10 hours a day.”

While most students have already returned home, more than 700 are expected to remain in Houston until returning to campus in time for the resumption of in-person classes on Sept. 27. 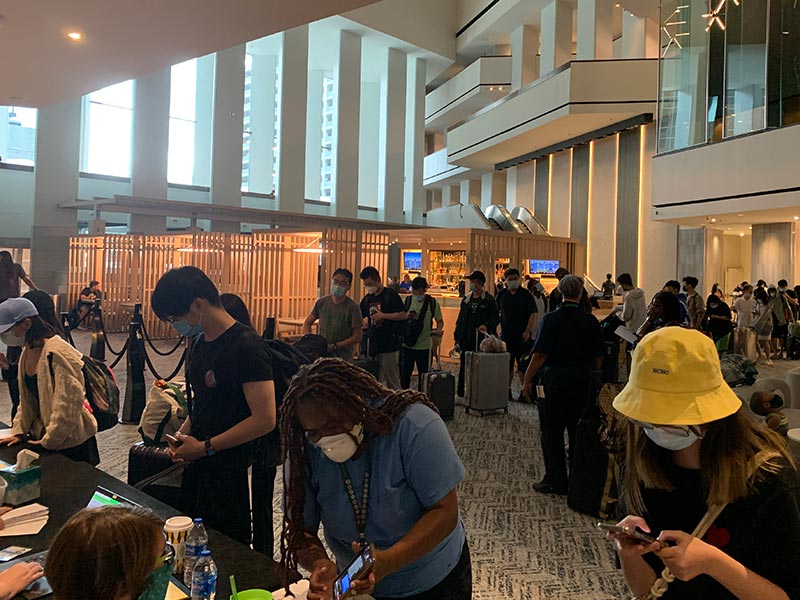 Tulane students who were relocated to Houston line up to check in at a hotel. Depending on their individual situations, the students stayed in Houston until their flights home or until in-person learning resumes on the university campus. (Provided photo)