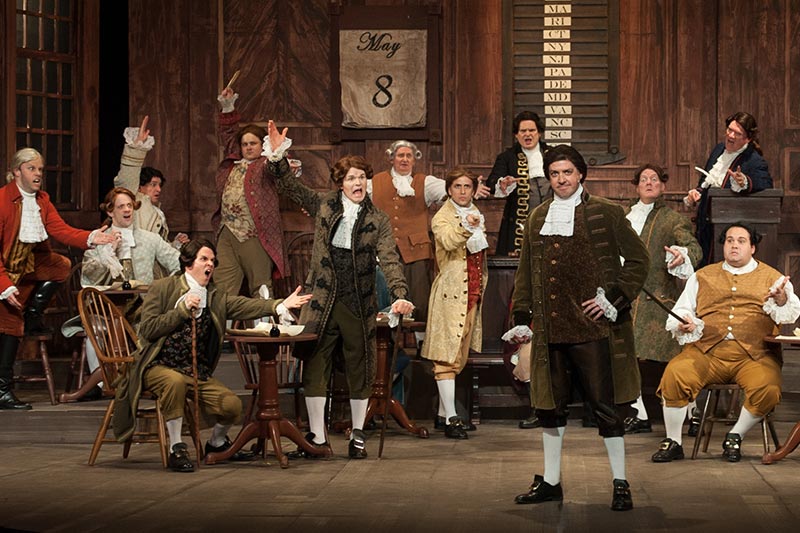 Gary Rucker (forefront), senior professor of practice in the Tulane Department of Theatre and Dance, stars as John Adams in 1776 the musical. (Photo by John Barrois)

Rivertown Theaters for the Performing Arts will open the Tony Award–winning musical 1776 on Friday (Nov. 4). The show features Gary Rucker, senior professor of practice in the Department of Theatre and Dance in the Tulane University School of Liberal Arts, as the main character, John Adams.

Rucker usually directs a handful of Rivertown’s productions each season, but A.J. Allegra, artistic director of The NOLA Project, will direct 1776, allowing Rucker to concentrate on the role.

One goal of Rucker’s role in the show is to keep the part of Adams fresh and relatable to a modern audience. In doing so, Rucker said he’s found a bit of himself in the role.

“It’s such a beautiful show, and I personally think not only students but people of any age should see this important work.”

“Balancing his bombastic nature in Congress with his more human and vulnerable side has been my focus so far,” said Rucker, who also serves as co-artistic/managing director for the theater.

He believes that producing this musical during an election year is a helpful reminder to citizens of what it took to bring the United States to fruition, regardless of party and political beliefs.

“It’s such a beautiful show, and I personally think not only students but people of any age should see this important work,” said Rucker.