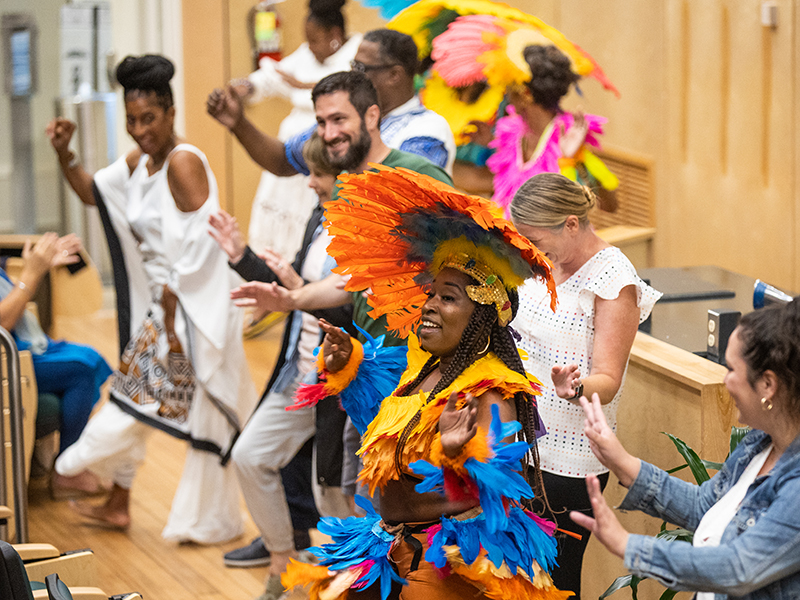 Dancers and musicians of the Casa Samba Afro-Brazilian cultural arts performance group were part of Tulane's celebration of Juneteenth. The group got the audience on their feet, with some attendees joining in the dancing. (Photo by Rusty Costanza)

Despite a Tropical Storm warning, Tulane students, faculty and staff gathered to celebrate Juneteenth on Friday, June 18, on the uptown campus in Room 117 of the Richardson Building. The special event was hosted by the Office of Equity, Diversity and Inclusion and the Carolyn Barber-Pierre Center for Intercultural Life.

“Juneteenth was an awakening for Black liberation in America,” Barber-Pierre said.

“This Juneteenth presents an opportunity to build upon solidarity and further facilitate and nurture love, respect, peace building between Black people, people of color, and our allied communities across the diaspora.”

Barber-Pierre added that several communities have observed Juneteenth for years, and the celebration on campus highlights the continued work Tulane is doing regarding equity, diversity and inclusion.

Following Barber-Pierre’s remarks, the audience participated in the singing of the Black National Anthem, “Lift Every Voice and Sing.”

Mia L. Bagneris, associate professor of African diaspora art history and studies of race in Western Art and director of the Africana Studies Program, then shared the history of Juneteenth.

The commemoration refers to June 19, 1865, when the last enslaved African Americans in Galveston, Texas, were informed by Union troops of the Emancipation Proclamation, which had been signed more than a year and half earlier.

“Since then, it has been observed in Black communities as a commemoration of the end of slavery and a celebration of freedom,” Bagneris said.

She noted that the day has grown in popularity and observance throughout the United States in recent years, with it being approved as a federal holiday just last week.

Bagneris said it’s important in celebrations of Juneteenth to understand the facts surrounding the Emancipation Proclamation and acknowledge that it was not the “real instrument of Black freedom” — rather it was the actions of Black people escaping from slavery to seek safe havens across Union lines that pressured President Lincoln to issue the proclamation.

“Juneteenth is both a celebration of Black freedom from legal slavery in the U.S. and a call to work for the continued liberation of Black people from the enduring legacies of slavery,” Bagneris added.

While slavery ended decades ago, the enduring legacies of slavery and racial inequities are still present, she said, “in wealth, in education, in housing, in health care, in the carceral system.”

Ra Malika Imhotep, Global South research fellow at the New Orleans Center for the Gulf South, performed a poem, “General Order No. 3,” whose title references the official order informing the last enslaved Africans that they were free. Before the poem was recited, Imhotep read the order issued years ago.

Jinaki Flint, a staff psychologist at Tulane’s Counseling Center, then invited the audience to reflect on how, psychologically, enslaved people were able to endure and survive the atrocities at the time.

Flint explained that song, dance and language were powerful tools to help slaves survive the trauma they experienced physically and emotionally.

To close the event, dancers and musicians of the Casa Samba Afro-Brazilian cultural arts performance group got the audience on their feet, with some attendees joining in the dancing.

On the importance of observing Juneteenth, Anneliese Singh, associate provost for diversity and faculty development and chief diversity officer, said, “When we learn more about Juneteenth, we can see how the historical roots of anti-Black racism manifest today. We can use this learning to identify the work ahead we must do to actively interrupt anti-Black racism and engage in racial healing.” 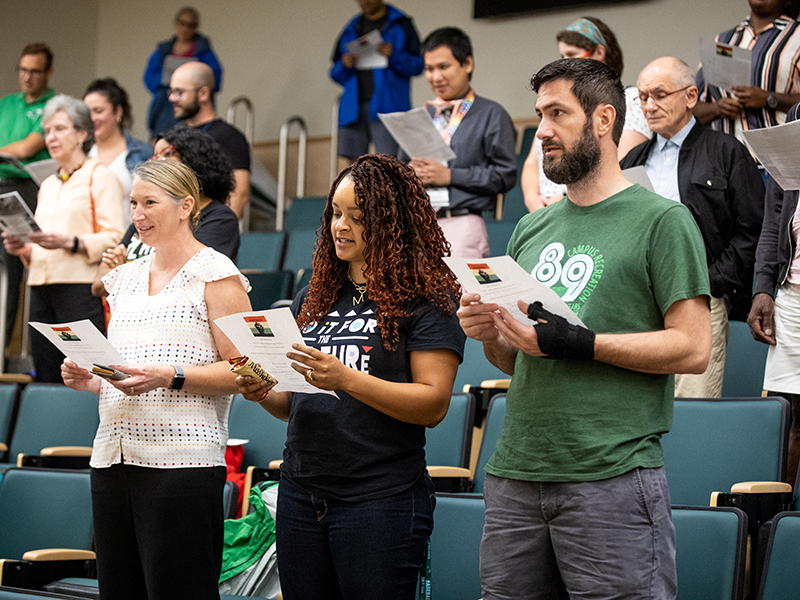 As part of the event, the audience participated in the singing of the Black National Anthem, “Lift Every Voice and Sing.” (Photo by Rusty Constanza)