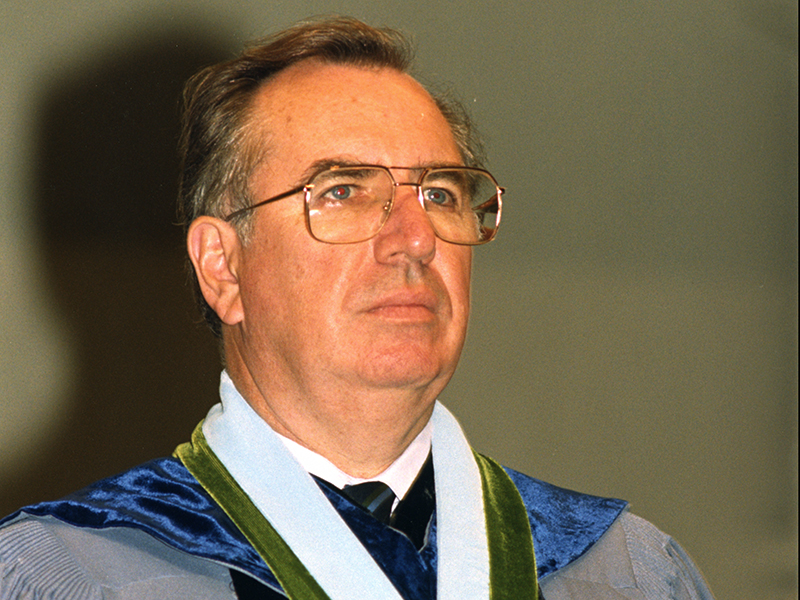 An excerpt from “The View from Gibson,” from President Mike Fitts:

With deep sadness I write to tell you that former Tulane President Eamon Michael Kelly passed away on June 28. He was a great man and friend, and we will miss him terribly.

Eamon was both a renowned international scholar and an acclaimed higher education leader, serving as president from 1981 to 1998. After his “retirement” as president, he and Bill Bertrand co-founded the Payson Graduate Program in Global Development, solving problems from Rwanda to Brazil. Eamon was still teaching and traveling the world researching his passion — improving organizational leadership and management for the betterment of the developing world.

Eamon’s impact on the history of Tulane cannot be overstated. During his 17-year tenure, the university experienced remarkable growth in its academic stature and reputation as a leading institution of research and scholarship. Among his proudest achievements was Tulane, at the time, having the highest percentage of African-American students of any major private research university in the United States.

These and other accomplishments earned him the Louisiana NAACP State Conference Distinguished Service Award, the Louisiana Human Rights Campaign Award, the George Washington Lucas Community Service Award for the NAACP, the National Arts Club Centennial Medal for Contributions to Education and Humanity and numerous other honors and recognition.

Eamon was the first social scientist to be elected and re-elected chairman of the Board of the National Science Foundation. He served as chairman of the Association of American Universities, the organization of leading national research universities. He was the original chairman of the Satellite Working Group, which established the first nationwide private satellite system in the United States for the benefit of the Public Broadcasting Service.

Eamon was active on the boards of many professional, philanthropic, civic and corporate organizations. He was still serving as a member of the congressionally mandated National Center for Advanced Research on Information and Digital Technologies, which is dedicated to improving learning through technology.

Eamon was also generous and gracious in offering his time and counsel to his successors. I will always cherish the time I spent with him, in which he shared with me all the joys and rewards he experienced as the leader of this storied institution. I learned so much from his wisdom and his passionate devotion to Tulane and its people. We will all miss him dearly.