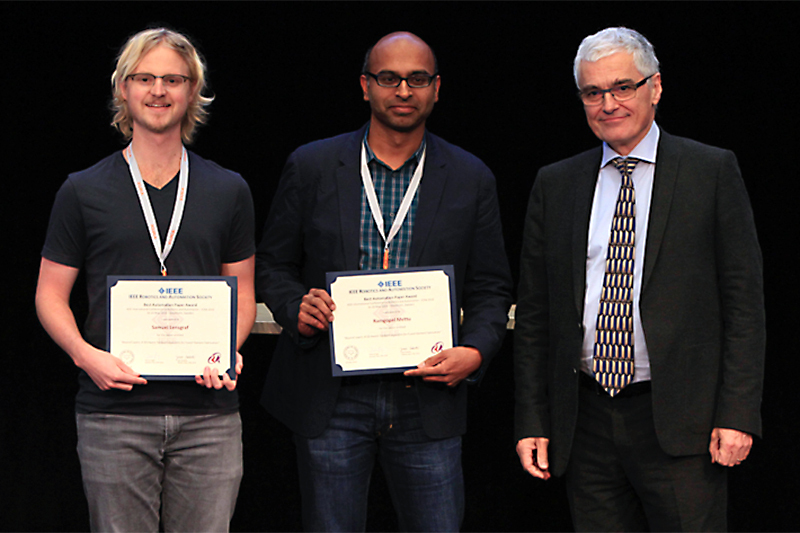 Their paper — “Beyond Layers: A 3-D–Aware Toolpath Algorithm for Fused Filament Fabrication” — beat the likes of “Control of Microstructures Propelled via Bacterial Baths and Sweet Pepper Pose Detection and Grasping for Automated Crop Harvesting” for Best Automation Paper at the International Conference on Robotics and Automation in Stockholm, Sweden.

“This is the premier conference on robotics and automation,” said Mettu. “It’s also special that one of our undergraduates not only got a paper into a top robotics conference, but also got a best paper award.”

“I am excited for the day that I get to see this theory out in the real world, making manufacturing more efficient.”

Judges based their selection on such factors as originality, depth, quality, presentation and significance as related to automation.

So what exactly is their paper about?

As Mettu explained, in traditional 3-D printing, a 3-D digital model is produced by what is essentially an inkjet printer. The printer “extrudes” filament in 2-D slices, building the model bottom up until it is complete.

Mettu and Lensgraf, who is now a software developer for a Tennessee startup, believe it can be used to significantly speed up fabrication. They have obtained a provisional patent on their work through the Tulane Office of Technology Transfer and are also exploring commercialization opportunities.

Lensgraf, who did most of the work on the paper as an undergraduate, said he has been overwhelmed by the recognition. “I am excited for the day that I get to see this theory out in the real world, making manufacturing more efficient,” he said.