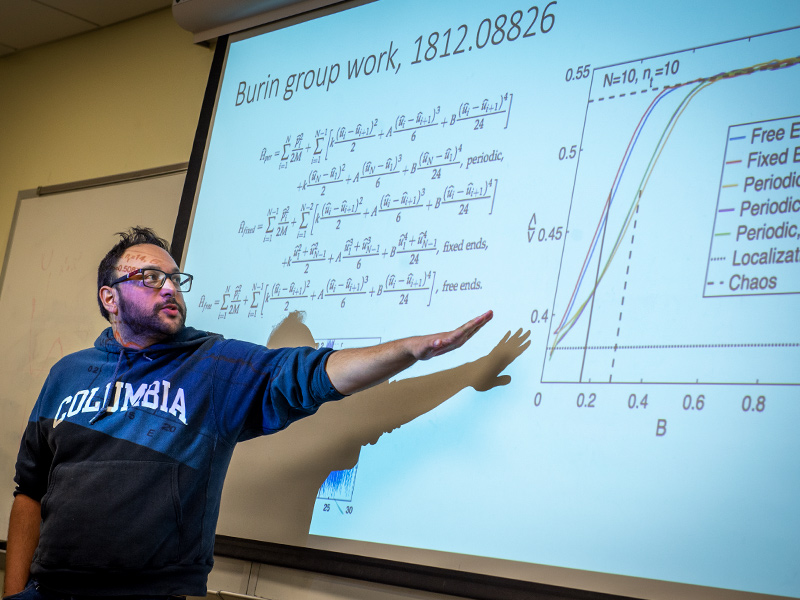 Tulane University graduate students studying with Alexander Burin, PhD, professor in the Department of Chemistry, were tasked with investigating and recreating the celebrated Fermi-Pasta-Ulam-Tsingou numerical experiment as their final project in his Special Topics in Physical Chemistry course – an experiment that has remained unsolved since 1953.

The experiment is named after the four scientists - Enrico Fermi, John Pasta, Stanislaw Ulam and Mary Tsingou - who first attempted to explain the nature of irreversibility on a molecular level. They were also the first to do so using a computer simulation.

An example of this irreversibility the scientists expected to capture in a simple form is to imagine two solids, one hot and one cold. If you connect the two, heat flow will occur in only one direction – from the hot body to the cold body – equally distributing the heat energy.

That is the essence of the thermodynamic principle of equipartition, and the principle also works for explaining energy distribution in different types of molecular motion, which should result in each moelcule having identical energies, or so it was thought.

The scientists studied and mimicked a single chain of atoms coupled by subatomic coiled springs. They then excited one type of molecular motion and waited for the energy to be distributed between all other types of molecular motion with the expectation that the energy would be distributed uniformly among them, exhibiting displacement among the molecule.

Instead, what the scientists found was that the energy was in fact reversible, debunking their original expectations. After time, the model the scientists created shockingly showed that the displacement among the molecules returned fully back to their original state and would continue this process, essentially forever.

“This was the main essence of their paradox: the first probe of irreversibility results in reversibility,” Burin said.

The concepts developed from this paradox were soliton - which can be described as non-linear waves propagating, similar to a tsunami - and chaotic versus integrable, solvable or reversible, behavior.

The six graduate students in Burin’s class were tasked with repeating this paradox and investigating the borderline between reversible and irreversible behavior by demonstrating specifically assigned numerical settings using MATLAB software to create video simulations of their findings.

Each of the students presented their research on the final day of class last semester.

“I was so impressed that they did it,” Burin said.

This was the first time Burin presented students with this sort of assignment, and he says without Tulane’s expanded MathWorks license allowing students the opportunity to have access to the software, none of this would have been easily achievable.

MATLAB software is, as Burin describes it, “a sort of computational laboratory for students.” The software allows students to solve long, complicated equations and present their data in the form of graphs and video animations.

Andrii Maksymov, PhD, former research assistant in Tulane’s Department of Chemistry, completed his PhD the day the students presented their findings and assisted the students throughout the semester.

He says the software is a great tool for interactive learning experiences.

“It’s more than just writing an equation on the board which is hard to comprehend sometimes,” Maksymov said. “Students get to interact with it, play with different parameters and observe their own results.”

Maksymov won’t be straying far, at least intellectually, from his research with Burin, as he will begin a position at IonQ, a quantum computing and software company in Maryland. It’s a perfect fit, as Burin explains, because quantum computers need their systems to be reversible and the computers essentially are used to solve some of science’s most complicated problems.

The research of Burin’s graduate class was supported by a grant from the National Science Foundation for the investigation of “vibrational ballistic energy transported through molecules.” The research is performed experimentally by Igor Rubtsov, PhD, professor in the Department of Chemistry, and his group, while Burin’s group provides the theoretical background for this research.

Burin says he will try to assign a similar task in his thermodynamics class next semester where students can use MATLAB, with the hopes of expanding use to his higher-level undergraduate courses.

“This class (Special Topics) gives real research experience. So, if there are students who have potential to dedicate their life, future life to science for creative work, this would be a good jump start.”