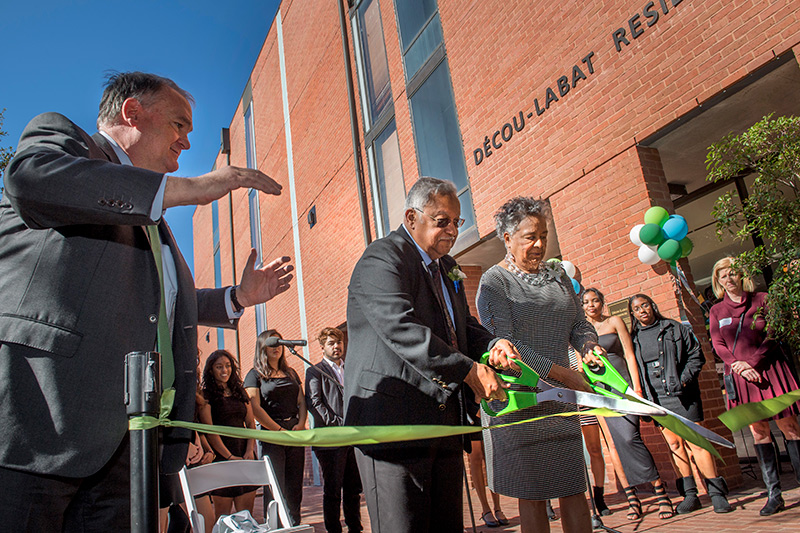 In 1966 and 1967, Deidre Dumas Labat and Reynold T. Décou became the first African American undergraduates to earn degrees from Newcomb College and Tulane, respectively. This weekend these distinguished alumni were recognized with the naming of the buildings formerly known as Willow Residences in their honor.

The dedication of The Décou-Labat Residences began with a celebratory brunch. Following brunch, guests were led by a second-line band to the newly named Décou-Labat Residences for a ribbon-cutting ceremony. The day concluded with Conversations in Color, a discussion between Labat and Décou moderated by Kim Boyle, a member of the Board of Tulane as well as board president and chair of the Amistad Research Center, which hosts the Conversations in Color speaker series. The conversation centered around the undergraduate experiences of Labat and Décou.

As Boyle asked questions, guests listened attentively as Labat and Décou described their day-to-day life at Newcomb and Tulane. Their accounts revealed the racism and hostility within their new academic communities, as well as the institutional and social challenges they faced. For example, Labat said that she took an English class during her second year at Newcomb, and her professor consistently graded her work lower than the rest of the class. When Labat asked her professor how she could improve her grade, she was met with scorn.

“She said, ‘You knew before you came here that you couldn’t compete,’” Labat quoted. “‘You knew you couldn’t handle these girls here.’”

While Décou was also faced with racism during his time at Tulane, his experience was different. Unlike Labat, Décou lived on campus for the first few months of his college career, and because of this he endured constant harassment from his fellow residents. This included residents knocking on his door and calling him racial slurs and even leaving bags filled with human excrement at his door.

When Décou witnessed the sight of a burning cross outside his room accompanied by a sign telling him to leave, he decided that living at home would be the best for his safety.

“I cannot imagine how difficult it must have been – and how brave these two heroes were – to enroll in a newly-integrated campus,” Tulane President Mike Fitts said. “Their courage and sacrifice are an inspiration to the entire Tulane community.”

Despite their difficult college experiences, Labat and Décou persevered. In 1966, Labat earned her bachelor’s degree in biology, and in 1969, she earned her master’s degree in biology. She went on to have a successful career in higher education, including serving as the senior vice president for academic affairs at Xavier University of Louisiana. Décou, a two-time graduate from Tulane’s School of Arts and Sciences, earned his bachelor of science degree in 1967 and a bachelor’s degree in earth sciences in 1979. After graduation, Décou enjoyed a 40-year career as a petroleum geologist.

Neither Labat nor Décou expected to be hailed as pioneers when they first enrolled into Newcomb and Tulane. They simply longed for a quality education and a chance to prove their worth. But their determination and courage opened the door for thousands of young African American students looking for a chance to succeed.

The dedication of The Décou-Labat Residences is the first of a multi-year effort to acknowledge the crucial impact Tulanians from diverse backgrounds have had on the university.

These recognitions were inspired by recommendations from many Tulanians, including the Undergraduate Student Government, which has been deeply involved in advocating for greater diversity and inclusion on campus. Honoring those who have built a better Tulane is also a vital part of the continued efforts of The Presidential Commission on Race and Tulane Values. The goal of the commission, founded in 2015, is to make the university a more racially diverse, inclusive and supportive community.

“Throughout this entire process, our goal is to better understand who we are as an institution and who we want to be in the future,” Fitts said. “It was clear from the beginning that Dr. Labat and Mr. Décou should be at the very top of the list of important individuals to honor.”