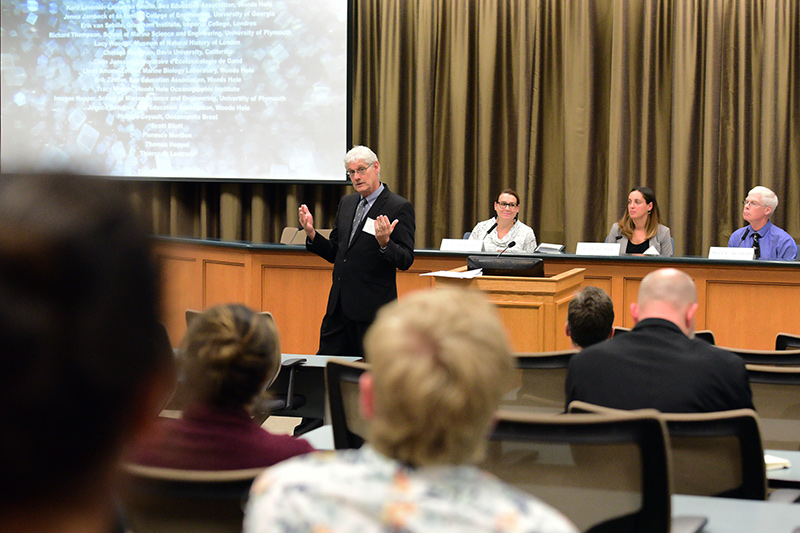 Tulane Institute on Water Resources Law and Policy Director Mark Davis (standing left) moderated a panel discussion on the issue of global plastic pollution following a screening of the documentary, “Oceans: The Mystery of the Missing Plastic." (Seated from left to right) Camille Pollan of the City of New Orleans’ Office of Resilience and Sustainability, Ika Paul-Pont researcher at Centre national de la recherche scientifique (France) and Mark Benfield, professor at LSU's College of the Coast and Environment. (Photo by Cheryl Gerber)

Ninety-nine percent of the plastic that should be floating in the oceans is missing. Even accounting for the plastic that washes up on beaches or is trapped in arctic ice, millions of tons have simply disappeared. Where did it go?

This topic was the focus of a documentary film screening, “Oceans: The Mystery of the Missing Plastic," and panel discussion hosted by the Tulane Institute on Water Resources Law and Policy and the Tulane Center for Environmental Law at the law school's John Giffen Weinmann Hall on Nov. 7.

The event was part of the French American Climate TalkS (FACTS) series, a program of the French Embassy and the French Consulate’s Office of the Scientific Attaché. The 2016 award-winning documentary investigates what happens to the plastic that breaks down into smaller and smaller particles that are invisible to the human eye, but never really go away.

Discussion focused on consumption as a learned behavior, with single use plastics as the chief culprit. More outreach and education, as well as increased science literacy are needed to get the message out.

“Effecting change requires advocacy,” Davis said, “as our policymakers are more likely to pay attention to calls from 100 concerned constituents than a single article by a renowned expert published in a scholarly journal.”

From paper straws to bamboo utensils to aluminum water bottles, market-based solutions arise out of working with industry to imagine sustainable alternatives. Eighty percent of ocean plastics originate on land. Since Tulane introduced the OZZI system of reusable food containers at campus dining locations, over 20,000 food containers have been saved from the landfill.