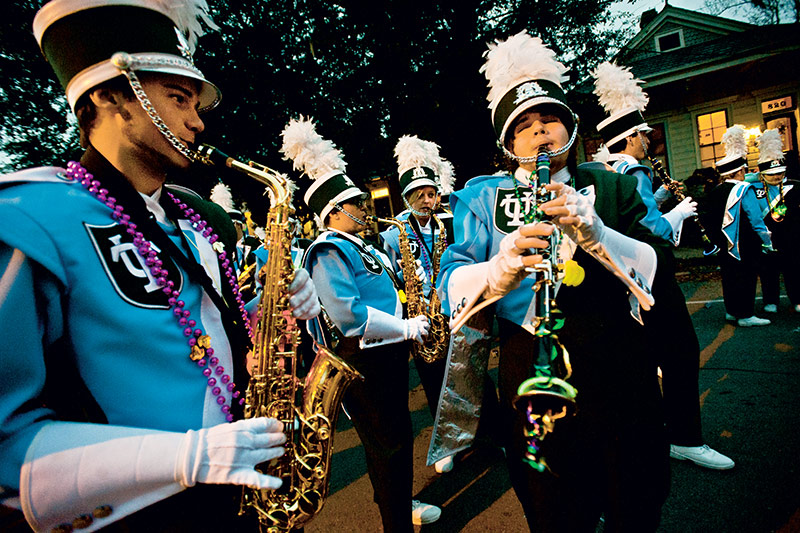 Check out where to catch the Tulane University Marching Band parading through the streets of New Orleans this Carnival season. (Photo by Paula Burch-Celentano)

Whether you prefer the neutral ground or the sidewalk side of the parade route, you’ll want to be in the front row to catch the Tulane University Marching Band marching through the streets of New Orleans this Carnival season.

On Saturday, Feb. 3, the band will bring the noise to Louisiana’s Northshore when they march in Covington’s Krewe of Olympia at 6 p.m.

Barry Spanier, who has directed the band for 14 years, said that the first parade is always an eye-opening experience, especially for new band members.

"We want to perform as well in the last mile as we do in the first mile.”

At 111 members strong, the marching band will parade with the Shockwave dance team and the color guard as well as the classic band with battery percussion, brass and woodwind sections.

“We’ve always had the percussion in the back, but we’ve gotten so big that we moved them up into the middle of the instrumentation block so that everyone in the band can hear them better,” said Spanier.

As New Orleans' only collegiate marching band, the group also welcomes students from other local institutions, including Loyola University, the University of New Orleans, Delgado Community College and Xavier University, to join in the citywide celebration.

To prepare for the raucous parade treks, Spanier has held rehearsals twice a week since the season began in early January to guide band members in learning parade protocol and building endurance.

“The biggest challenge is the physical demand — the rigors of performing for 5 to 7 miles nonstop is tremendous,” said Spanier. “The audience only gets bigger as you move closer to downtown, so we want to perform as well in the last mile as we do in the first mile.”

While the band will play a traditional lineup of Mardi Gras tunes, like “Iko Iko” and “When the Saints Go Marching In,” Green Wave fans can also expect to get down to a special arrangement of “My House” by Flo Rida.