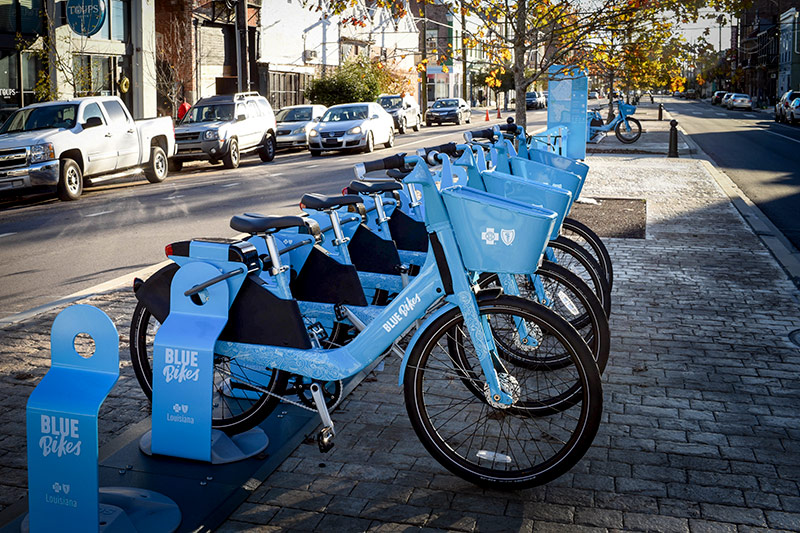 The city of New Orleans launched its first bike-share service, Blue Bikes NOLA, earlier this month. The program is still growing, but Tulane community members can help shape its future by taking part in the Tulane Bike Share Survey, which was created through a collaboration between the Tulane Prevention Research Center, Tulane University Shuttles & Transportation, and the Tulane Office of Sustainability.

“Active transportation, which is walking, biking and taking public transportation, is important for maintaining health and saving money,” said Jeanette Gustat, clinical associate professor of epidemiology and faculty co-investigator at the Tulane Prevention Research Center. “I think that Tulane community members are going to be enthusiastic participants of the bike program.”

Sponsored by Blue Cross Blue Shield of Louisiana, Blue Bikes NOLA was developed through a partnership between the city of New Orleans and Social Bicycles (SoBi).

“Active transportation ... is important for maintaining health and saving money.”

The transit system, which also operates in other cities, offers participants opportunities to reserve their bikes online or to rent them on the spot. At the end of their journey, riders drop off bikes at the nearest bike-share station.

New Orleans’ program will have 70 stations and 700 bikes available by next year. The city also plans to eventually extend the system to include 90 stations and 900 bikes.

“Now that the bike-share program is currently running, it would be great to get the Tulane community’s feedback in order to advise the city on how to expand the program to the uptown campus,” said Gustat, noting that students, faculty and staff on both the uptown and downtown campuses are welcome to participate in the survey.

“The bike-share program is a positive step for New Orleans in reaching its 300th anniversary goal next year of being one of the nation’s healthiest cities. Everyone should go out and try it,” said Gustat.