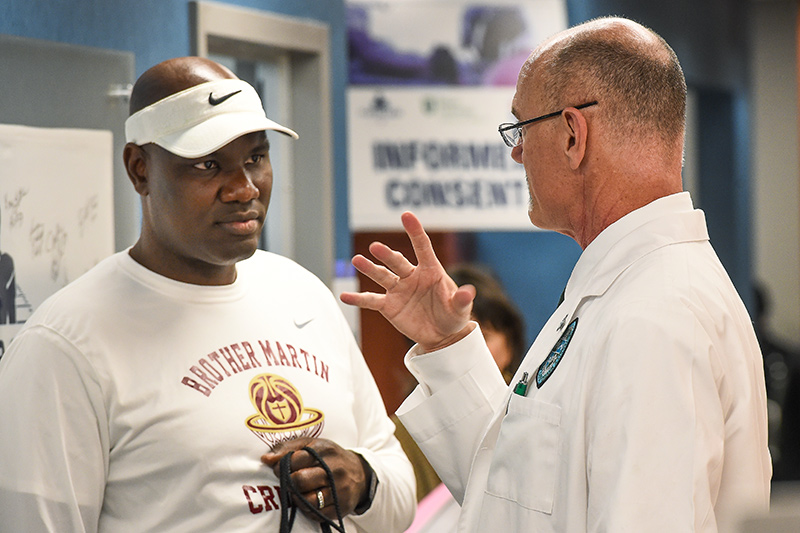 More than 50 former NFL players descended on the Tulane Medical Center and all received the red-carpet treatment during the NFL Player Care Foundation Healthy Body and Mind screening held at the Tulane’s Professional Athlete Care Team (PACT) clinic on Dec. 2.

Former Tulane and NFL standout Lionel Washington and New Orleans Saints star Deuce McAllister joined other NFL alumni like Sylvester Morris, who played for the Kansas City Chiefs, and Frank Lockett, who played with the Green Bay Packers, Miami Dolphins and in the USFL, as part of the league’s efforts toward post-career health care for all eligible players.

The screening is one of a series administered nationwide by PACT and funded by the NFL Player Care Foundation. Participants get a multitude of medical tests and speak with doctors and other health care professionals for issues ranging from cardiovascular and prostate care to mental health in a setting of comfort and privacy.

“This isn’t cold, clinical kind of stuff we do. It’s a locker room, family atmosphere."

“We take a different approach,” said Dr. Greg Stewart, medical director of the program who holds numerous titles at the Tulane Institute of Sports Medicine. “This isn’t cold, clinical kind of stuff we do. It’s a locker room, family atmosphere. At the end, they feel welcome and comfortable.”

PACT conducts 10 screenings annually at NFL activities like the Super Bowl and also targets U.S. cities with large concentrations of former players. With 10-15,000 former NFL players living in the U.S., one of the goals is to reach players who may be reluctant or simply aren’t aware of the health risks they face.

Morris is a good example. He was screened for the first time and was wowed by the process.

“I don’t like coming to the doctor,” Morris said with a smile. “Most players are like me; they don’t want to know if something’s wrong. But this was impressive. They provide a lot of information about your body and how to be healthier.”

Washington said he’s thrilled with the program, and that it’s long overdue.

“It’s special,” said Washington, who played 14 seasons in the NFL. “It’s a great thing the NFL is doing. They can do more but this is a start. It’s a good opportunity for guys like myself to make sure we’re healthy.”