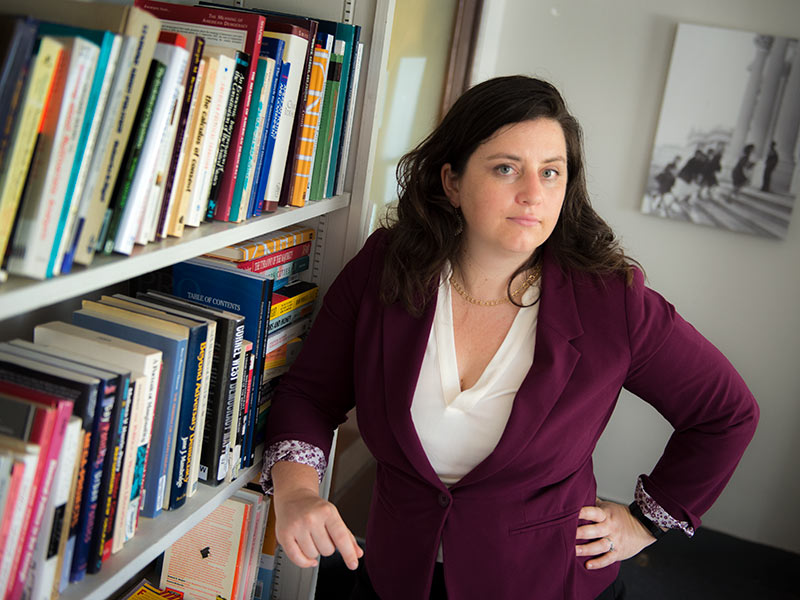 Tulane Associate Professor of Political Science Mirya Holman of the School of Liberal Arts has been awarded a grant of more than $70,000 to examine when and how reforms might work to increase the accountability sheriffs have to their local communities. The grant was awarded by Arnold Ventures, a Houston-based philanthropy. (Photo by Paula Burch-Celentano)

Tulane Associate Professor of Political Science Mirya Holman has been awarded a grant of more than $70,000 to examine when and how reforms might work to increase the accountability sheriffs have to their local communities.

The resulting white paper by Holman and fellow political scientist Emily Farris of Texas Christian University, supported by Arnold Ventures, will examine what interventions have worked and which ones have failed and why. It will also investigate how some sheriffs have played a role in subverting attempts at reform and what can be done to change that. A set of appendices full of data useful for other researchers interested in reform efforts will be included.

Holman and Farris’ research shows that over 3,000 sheriffs hold elected office nationwide, with tremendous power and authority at their disposal and often little oversight. In the wake of the national reckoning on race and accountability among law enforcement, the researchers say some sheriffs have proven particularly resistant to reform efforts at the local, state, and even federal levels. Many sheriffs argue they don’t require additional oversight because voters hold them accountable at the ballot box, Holman says.

According to Holman, “Sheriff elections are rarely competitive, the tenure for sheriffs is longer than other local elected officials and police chiefs, they rarely face competitive challengers in elections, and the pipeline to office is constructed to limit accountability.”

Holman and Farris have been collaborating on research on sheriffs for more than a decade. The scholars were drawn to the topic from their own political socialization and the relative absence of academic work examining the office and the power it wields. “Being from Oregon and Alabama respectively, we both grew up in places where sheriffs are really important but found that political scientists were largely ignoring the subject,” said Holman. “Once we got started on research, we just couldn’t stop. I like to joke that I’m ‘never not sheriffing.’ There are too many incredible stories and frightening facts, and the field simply was not paying attention to it. We are very excited about partnering with Arnold Ventures to shine a spotlight on the office.”

The project draws on Holman and Farris’ familiarity with the history of the office, archives of materials from sheriffs and sheriff associations, and extensive data collected on the office over the years. The two are currently finishing their book The Power of the Badge for the University of Chicago Press.

“Mirya Holman’s research on sheriffs takes an important office that has not received significant attention from scholars and brings the tools and techniques of political science to bear on furthering the cause of justice,” School of Liberal Arts Dean Brian T. Edwards said. “This is research that matters to a more equitable future.”

Arnold Ventures is a Houston-based philanthropy dedicated to tackling some of the most pressing problems in the United States.