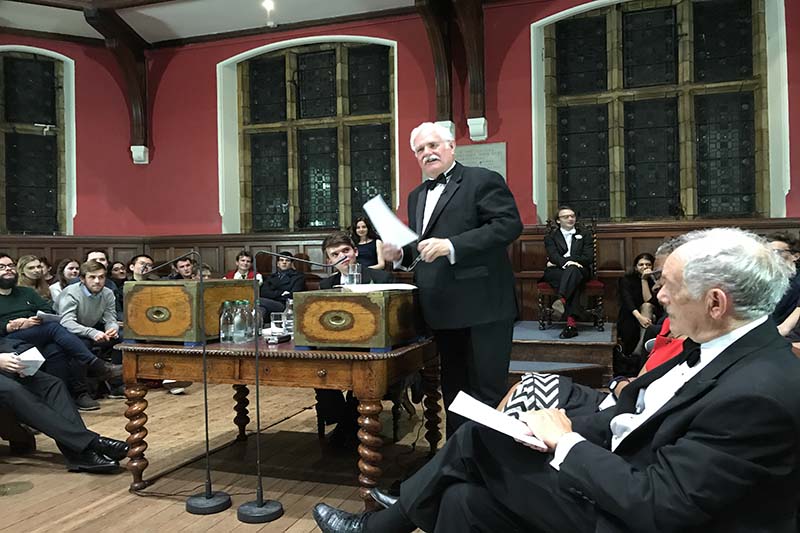 Frank Tipler, Tulane professor of mathematical physics, traveled to England to debate at the Oxford Union that science is capable of answering the world's most pressing questions. (Photograph provided by Frank Tipler)

Frank Tipler, Tulane professor of mathematical physics, argued on Oct. 18 against the proposition “that science alone can never answer our biggest questions” at the Oxford Union, the famous debate society founded in 1823 at Oxford University to protect free speech.

“I said that science can answer all questions,” said Tipler, who had only 10 minutes to state his argument, which cited the writings of philosophers Immanuel Kant and David Lewis, discussed the cosmological singularity, the fact that there is more than one universe, and ethics. Tipler claimed that the ethics of science resolves all ethical dilemmas.

Science even resolves Kant’s metaphysical dilemmas — Is there a God? Do we have free will? Is there life after death? — said Tipler, who describes himself as a physics imperialist.

“If you know physics, then you know everything you need to know,” he said, nonetheless noting that at the event, a physics student argued in favor of “science alone can never answer our biggest questions.”

The event was staged with three debaters on either side of the motion. Despite Tipler and his fellow debaters’ delivery in favor of scientific supremacy, the audience voted in favor of accepting the proposition that science alone cannot answer all the big questions.

Tipler said he enjoyed the event and was not disappointed that the audience voted with the proposition.

“It doesn’t matter, because in the end science always wins,” he said.

Video of Tipler’s debate will be available by November; go to www.oxford-union.org/ for details.