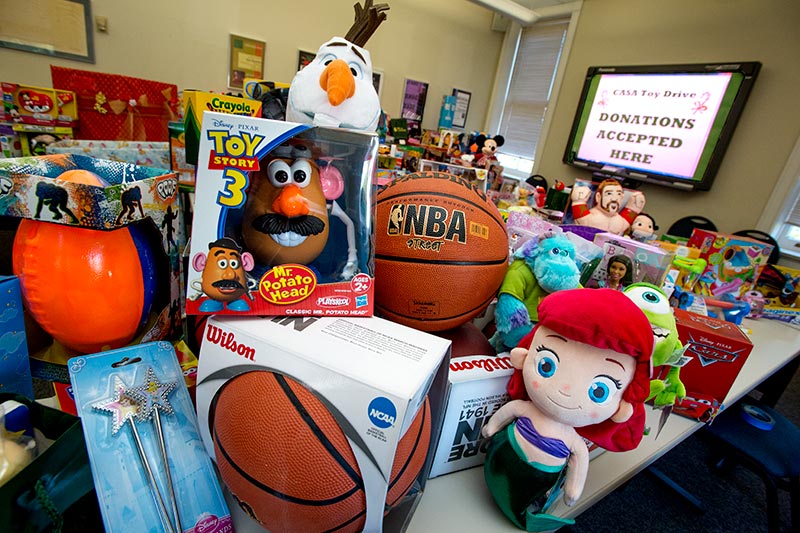 Donated gifts flood a drop-off location on the uptown campus during a previous year's drive. (Photo by Paula Burch-Celentano)

Students, faculty and staff looking to give back to the community this holiday season can make toy or monetary donations to the annual CASA for Children Drive, run by the Staff Advisory Council (SAC). Donations will be accepted through Dec. 2.

Coordinator Sarah Withers said the SAC has been hosting the drive since 2008 in an effort to raise funds and collect toys for an organization that is close to the hearts of many staff members.

Court Appointed Special Advocates (CASA) for Children is a national organization that trains adult volunteers to be court advocates for abused and neglected children. Many of these children have been in the foster care system and have few adult figures in their lives. CASA for Children volunteers help them navigate the welfare system, understand what is occurring in their court cases, and access any resources they may need for their well-being.

“CASA for Children provides a voice to one of society’s most vulnerable populations – it is so important that they have someone to look out for their interests,” said Withers, who hopes to surpass a record number of donations received in 2015.

Toys and monetary donations are distributed to CASA’s offices in Orleans, Jefferson, and St. Tammany parishes.

New, unwrapped toys in original packaging can be dropped off at several locations on the uptown and downtown campuses as well as the Primate Center. A full list of locations is available here. The drive also accepts check donations at any of these locations, as well as online credit card donations. Additional questions can be directed to Sarah Withers at swithers@tulane.edu.

She fights for religious rights
Students dig into the history of eating and drinking
In your own words: Lena Rollenhagen
Food for thanks
All yellow