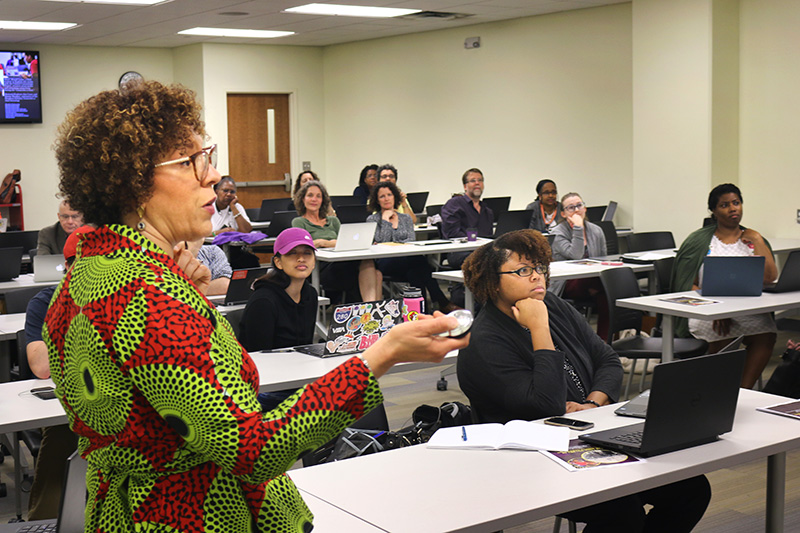 Tulane students enrolled in the course Reconstructing America have teamed up with researchers from the Colored Conventions Project (CCP) to recover materials documenting the political meetings of 19th-century black activists within the United States. Originally launched by the University of Delaware in 2012, the CCP aims to illustrate the importance of these conventions by publishing proceedings, original newspaper coverage, petitions and other historical documentation of the meetings and the political and social activities that arose around them.

The students’ discoveries will become part of the CCP’s collaboratively developed digital archive and will focus on materials relating to two Louisiana State Colored Conventions — political meetings attended by African-American community leaders that took place in New Orleans in 1865 and 1872.

Reconstructing America is a capstone course for English majors, taught by Kate Adams, Tulane associate professor of English and holder of the Kimmerling Chair in Women's Literature.

“I was initially drawn to the class for its specific focus on analyzing black narratives from a period of time that is generally glossed over in the discourse on black history in the U. S.”

Adams said that her students discuss problems faced by African-Americans during the Reconstruction period, including voting rights and access to citizenship. They also reflect on how society is still grappling with these issues today.

“I was initially drawn to the class for its specific focus on analyzing black narratives from a period of time that is generally glossed over in the discourse on black history in the U. S.,” said Tulane senior Haley Riemer. “While we're still in the early stages of our research, I look forward to finding documents and organizing information that will help tell these stories in engaging ways.”

Adams’ class is now teaming up with research librarians at the Louisiana Research Collection (LaRC) at Howard-Tilton Memorial Library to study the collection’s materials related to the conventions in New Orleans.

“The LaRC has hard copies of the first daily black newspaper in the country — The New Orleans Tribune,” said Adams. “My students will be combing through it.”

Once useful excerpts from the documents are collected, Adams will then send them to the CCP for transcription.

“I think the work the CCP is doing is so important, because it's uncovering a history of black organizing that is widely unknown,” said Riemer. “I'm excited to be contributing to that mission locally.”