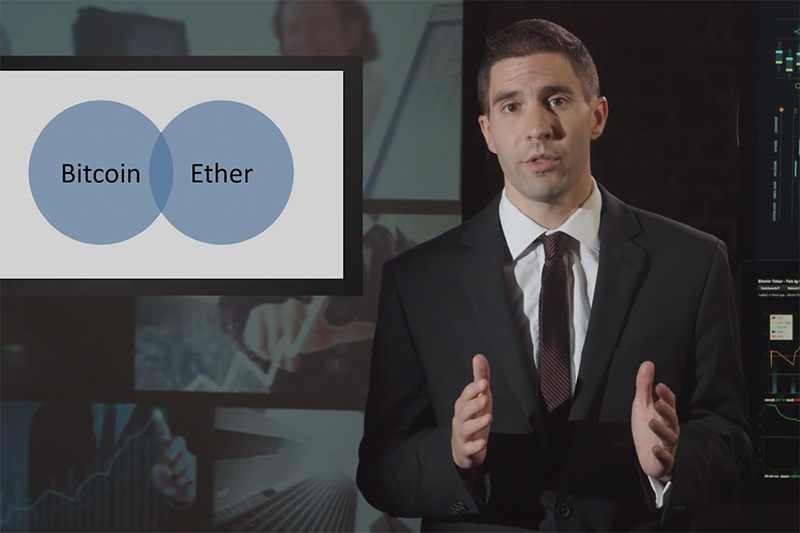 In an image from his team’s video submission to The Economist’s Investment Case Study Competition, Jake Tremblay (MBA ’17) makes his case for a portfolio comprising 67 percent Bitcoin and 33 percent Ether.

A team of three MBA students from Tulane University’s A. B. Freeman School of Business won first place and the top prize of $10,000 in the second annual Economist Investment Case Competition.

This year, the Economist’s competition was sponsored by Kraken, one of the world’s largest global Bitcoin exchanges, which challenged students from 13 business schools around the world to evaluate the long-term investment potential of digital currencies Bitcoin and Ethereum by investing $1 million in bitcoins and ethers.

Freeman students Alex Moore, Jon-Paul Navarro and Jake Tremblay earned first-place honors by creating a minimum-variance portfolio of 67 percent bitcoin and 33 percent ether based on historical-return data of the two cryptocurrencies. They validated their strategy using a multiple-regression model, back-testing and a Monte Carlo simulation.

“The Investment Case Study Competition attracts entrants from some of the top business schools in the world, so to earn top honors is an extraordinary accomplishment.”

Ira Solomon, dean of the A.B. Freeman School of Business

“This was an investment competition, so we knew we had to approach bitcoin and ether not as currencies but as a new class of assets, one that appreciates over time,” said Navarro. “That really modified the approach we took, so we were thrilled to discover that Kraken thought that approach was the best.”

“The Investment Case Study Competition attracts entrants from some of the top business schools in the world, so to earn top honors is an extraordinary accomplishment,” said Freeman School dean Ira Solomon. “I couldn’t be prouder to have Alex, J.P. and Jake represent Tulane and the Freeman School.”

“The team did a great job of framing the question and developing a comprehensive approach to solve it,” added John Clarke, Freeman School associate dean.  “There’s often multiple answers to problems in the real world, so it was great to see the team validate their approach and their answer.”

Watch the team’s video submission to learn more about the competition.