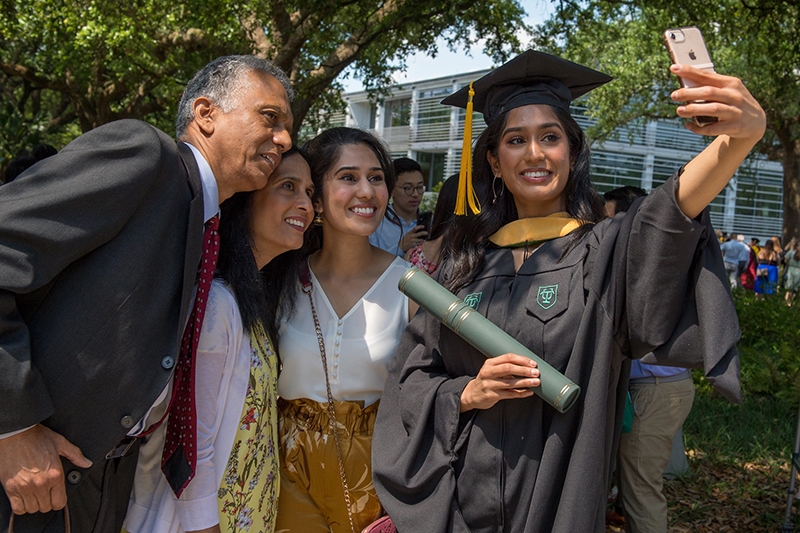 Lekha Thangada (right) celebrates with her family after graduating from Tulane University in May 2019. (Photo by Sally Asher)

Tulane University announced on Wednesday that its 2020 Commencement ceremony will be held for the first time ever in Yulman Stadium on the university’s uptown campus.

The Mercedes-Benz Superdome, which has been home to most Tulane commencements since 1999, will be undergoing renovations next year and therefore unavailable for Tulane’s graduation, which will take place on May 16.

Tulane commencements are among the country’s most memorable celebrations of academic achievement. From renowned speakers and honorary degree recipients — such as the Dalai Lama, Tim Cook and Helen Mirren — to famous musicians and New Orleans-style fun, Tulane’s commencements are in a class by themselves.

“While we were all looking forward to honoring our graduates in the traditional setting of the Dome, this change of venue opens up a world of opportunities and experiences for our graduates and their families — along with the chance to make new memories and establish new traditions,” the university said in a letter to graduating students.

The university plans to bring many of the most beloved Tulane Commencement traditions and all the excitement and music to the ceremony at Yulman.

“The ceremony, in its previous form, was designed to bring elements of Tulane's campus and the city of New Orleans into the Superdome,” said Aryanna Gamble, University Commencement coordinator. “We are thrilled to revive the Commencement tradition on our campus. It will be exciting to see graduates and their families celebrating in the very environment that helped shape their characters and start their careers.”

Until 1965, Tulane staged its Commencement ceremonies at various on-campus locations, but never in a stadium setting. The university returned to a unified ceremony — one that is open to all graduates — in 1999.