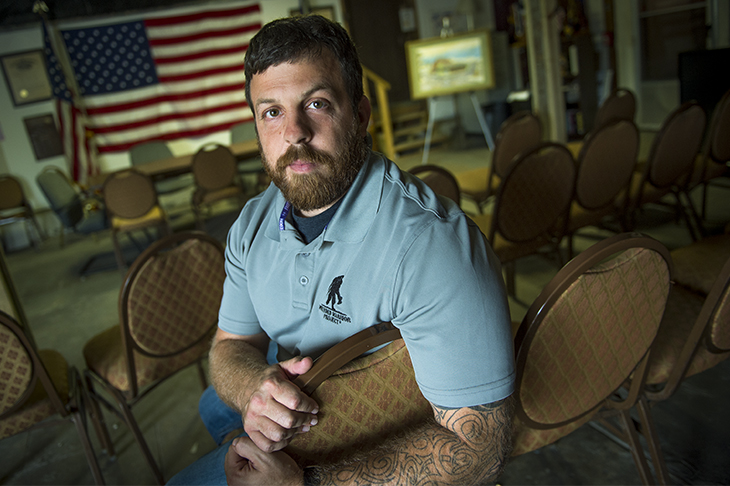 Jeremy Brewer is a member of the 2016 class from the Tulane School of Social Work master's degree program. (Photo by Paula Burch-Celentano)

Tulane University Master of Social Work candidate Jeremy Brewer, a U.S. Marine Corps veteran, served two deployments in Iraq from 2001-05, but the plan was always to finish his degree.

Brewer’s graduate internship in the outpatient mental health clinic of the Veterans Affairs Hospital provided him mental health treatment experience with both individuals and groups.

“To know that some of the things that I’ve gone through can be used to help others who are going through similar things is very rewarding.”

“I learned a lot over there,” says Brewer. “Not only about the profession and helping people, but also about the bureaucratic side of the VA. It was a great experience.”

Brewer was so eager to help his fellow veterans that he completed his 990-hour internship early to accept a position as an outreach coordinator for the Wounded Warrior Project to help open the group’s New Orleans office, which will cover Louisiana and Mississippi.

“To know that some of the things that I’ve gone through can be used to help others who are going through similar things is very rewarding,” says Brewer. “Especially with my internship at the VA, I had an advantage with our clients because I am a vet. They knew that I had been there and had some common experience. It’s been pretty awesome.”

“I look at it now, and I don’t know how I had time for this,” he says. “I worked full-time the whole time I was in undergrad and graduate school. I wish I had a good answer for how I did it. I just took care of the thing right in front of me and then moved to the next thing.”