Virus hunter: 'We have to double down' to fight COVID-19 variants 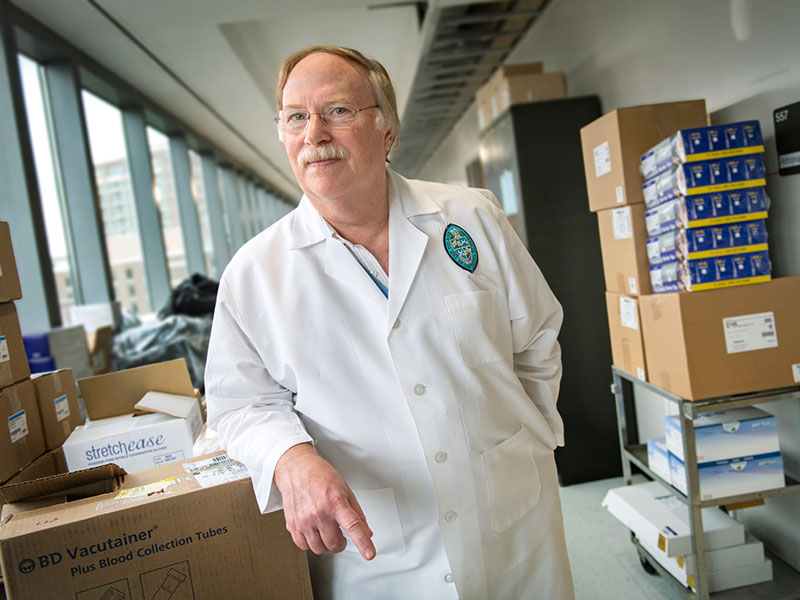 The SARS-CoV-2 virus is rapidly evolving as COVID-19 spreads across the globe. Tulane Microbiology Professor Robert Garry, PhD, is part of a national team of leading virologists who are sequencing coronavirus samples to monitor mutations. He spoke with Tulanian Now about what the new variants mean for transmission and how they may impact the next phase of the pandemic.

Q: What do we need to know about the new COVID-19 variants?

Robert Garry: We have three or four variants now circulating around the world. The one that most people recognize is the United Kingdom variant, known as B.1.1.7. It spreads easier than the other variants, but it is not more pathogenic. It doesn’t cause increased symptoms or illness. And, so far, there is no evidence it causes increased deaths. Now, the fact that you've got it spreading easier, means you're going to have more people infected. And that ultimately will result in more people in the hospital and more deaths. But, individually speaking, if you're infected with that variant, it's no worse than the ones that are currently most prevalent.

Q: How common is the U.K. variant in the United States right now and do you expect it to become the dominant strain here?

It is not prominent yet. We don't have good numbers, unfortunately, because the United States is behind other countries in terms of the amount of sequencing that we’re doing. Once it gets a toehold in, it will start to take off. But that's going to take several weeks to several months.

Q: Should we change our behavior because of the new variant?

Yes. We have to double down on those protections that everybody has been talking about — social distancing and wearing a good mask. Wear the best mask you can. If you can get your hands on a KN95 or an N95 that’s properly fitted, that's the kind of mask you want to wear. If you can't get one of those, multiple layers of cloth will do in terms of keeping the virus out of your lungs and keeping you from expelling it to other people so they can’t get infected.

Q: Do the vaccines work against the U.K. variant?

The B.1.1.7 variant does not seem to be as resistant to either vaccine-induced immunity or natural immunity as some of these other variants. The vaccines that we have in the U.S. — the Moderna, the Pfizer and, hopefully soon, the Johnson & Johnson vaccine — are going to be just fine against B.1.1.7.

Q: The other two primary variants are the South African variant, known as B1.351, and the Brazilian variant, P.1. These are concerning because they have mutations that may make the current vaccines less effective.

There have only been a few cases of both strains in the U.S. We don’t know yet how widespread these variants are in the U.S. They are most likely not as widespread as the B.1.1.7 variant. We don't think they have much of a transmission advantage. The current vaccines work against the South African and Brazilian variants, but there was reduced efficacy in some of the clinical trials done in those countries, and the vaccines took a hit. They weren't totally knocked out, but we got our expectations up with a vaccine that was 95 percent effective. In some of the cases, efficacy was knocked down to 70 percent against areas with those variants. Now, a 70 percent effective vaccine is still a really good vaccine from a public health perspective. Even if those vaccinated get infected with these new variants, they are still likely protected against the serious outcomes of the disease.

Q: What do these variants mean for reaching herd immunity? Is this going to take longer now?

We need to get the vaccines to as many people as possible. The vaccines will shut down the B.1.1.7 variant. By tweaking the vaccines a little bit, we can probably shut down the B1.351 and the P.1. variants. The new vaccines that were put together in rapid time — the messenger RNA vaccines — that's 21st century magic as far as I'm concerned. I think a lot of scientists over the past few decades have been skeptical about that approach, but you have to give credit to those companies that kept at it and finally figured out just what the right combination was to make those messengers get into your cells efficiently enough to give you a good immune response. Ninety-five percent efficacy is incredible for a vaccine. In the real world situation that might be a little lower. We're probably going to have to tweak them going forward. But that technology can be tweaked pretty easily. Just change the programming a little bit, and we'll have that Version 2.0 of the vaccine.

Q: When do you think we'll get out of this pandemic?

Well, before the new variants happened over the past few months, I was really optimistic about the third quarter of this year to begin to get back to some semblance of normal. That might still be a realistic possibility, but we’re just going have to watch the variants. Coronavirus is going to be something that we're going have to deal with going forward like the flu. When will we be totally back to normal? Probably sometime in 2022. We'll have Mardi Gras,and people will go back to the movie theaters and sit in a restaurant with 100 people. That's what I'm hoping.

COMPASS study seeks to measure community spread of COVID-19 in general population
Effort to prevent, treat COVID-19 gets a boost
Everything you wanted to know about the COVID-19 vaccines
The economics of a pandemic
Tulane to create its eighth Presidential Chair with $5 million gift from alumnus