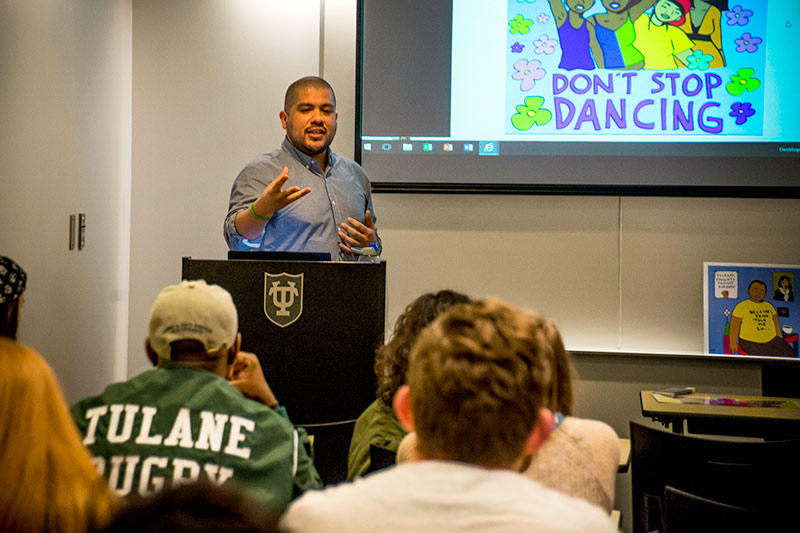 Artist Julio Salgado discussed the intersections between sexuality, art, activism and journalism during a lecture Monday on the uptown campus. (Photo by Nick Kallman)

“In the news, you either see a 30-second clip of someone coming over the border or a piece about an amazing undocumented student — there’s no nuance,” Salgado said Monday during his lecture on the uptown campus of Tulane University.

In response, he co-founded DreamersAdrift.com, a multimedia platform that utilizes videos, music, poetry and art to broaden the national narrative on undocumented people. He also created a series of prints that he titled “Illegals in Times of Crisis.” Here, he documents the “most mundane things that undocumented people do and the beauty of just hanging out.”

“In immigrant advocacy organizations, people are often discouraged to speak about queerness. I think that we should embrace it.”

Salgado’s work also focuses on the intersections between queer and immigrant identities, especially in the activism sphere.

“In immigrant advocacy organizations, people are often discouraged to speak about queerness. I think that we should embrace it,” said Salgado, who often depicts queer and trans immigrants in his art with a goal of reinforcing their existence.

Salgado discussed his immigration to the United States from Mexico with his family at the age of 11. He became interested in art during high school, and was eventually able to study art in college through a California law that allowed undocumented students to pay in-state tuition at a state university if they had a California high school diploma.

In addition to producing his own art, he works “to uplift the work of other undocumented, trans, queer and artists of color” through collaborative projects and his position as project manager at national arts organization Culture Strike.

The lecture was sponsored by the Office for Gender and Sexual Diversity, Office of Multicultural Affairs, GENTE, the Queer Student Alliance and the Taylor Center for Social Innovation and Design Thinking.