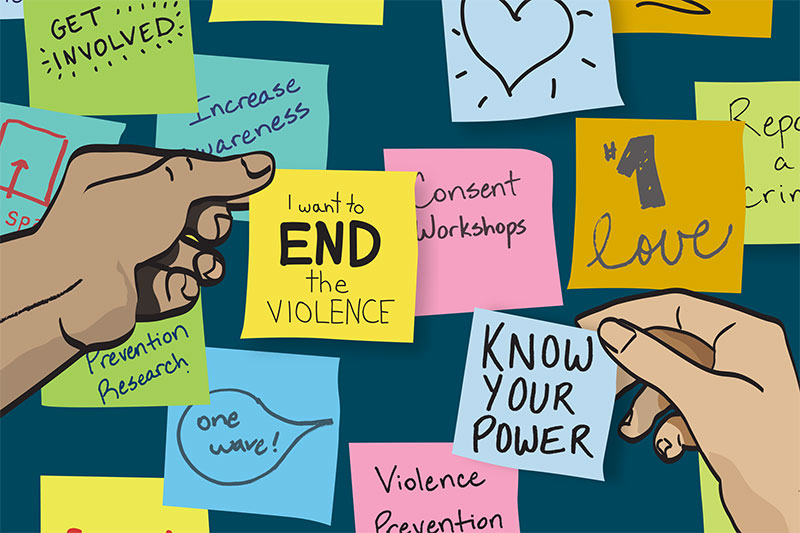 It’s not uncommon for an expectation of crime to be linked to a particular environment. For example: In a blighted neighborhood — there might be drug activity. In a retail store — there will be issues with theft.

But it is only in recent years that college campuses have come to be viewed as settings for instances of sexual assault by students against students. In light of this fact, revealed over and over again in student surveys conducted at universities throughout the country, Tulane is drawing a line in the sand and saying, “No more.”

“We are following the best practices for addressing campus sexual assault, but it’s not enough,” said Tulane University President Mike Fitts. “We must shift our focus to prevention. We must innovate, learn from each other, invite new voices to the conversation and adopt a willingness to challenge the status quo.”

“We must shift our focus to prevention. We must innovate, learn from each other, invite new voices to the conversation and adopt a willingness to challenge the status quo.”

Last year, as the results of the climate survey were shared, the Wave of Change campaign was launched to inform and engage the community and to identify effective ways to improve prevention, while changing aspects of our underlying culture that make sexual violence possible.

In fall 2017, Fitts created the Sexual Assault Task Force composed of faculty experts, staff members and students. The task force was charged with obtaining a better understanding of the reasons for sexual violence on college campuses.

With this understanding, the group developed evidence-based recommendations for how the problem could be eliminated.

Undergraduate Sexual Misconduct Prevention: Focusing on issues impacting undergraduates; programs and approaches to prevention of sexual misconduct; issues facing students of color and LGBTQ+ identifying students; and the use of alcohol as a tool of perpetrators.

The conclusions reached by each group have helped inform a path forward to stop sexual violence.

‘Heartbreaking’
Before the Sexual Assault Task Force was created in the fall, a climate survey on sexual violence and harassment had been conducted in spring 2017. The survey was available to all full-time graduate, undergraduate and professional students at Tulane.

The results from that survey were described as both “shocking and heartbreaking” by President Fitts during a Town Hall meeting to discuss the findings on Jan. 31, 2018.

“We were faced with painful truths about our community,” he said.

Nearly half — 47 percent of the overall student population, including 53 percent of all undergraduates — took the survey, a clear indication students welcomed the chance to be heard.

Of the respondents, the survey showed that 41 percent of undergraduate women reported experiencing sexual assault at some point while enrolled at Tulane. In the majority of the incidents of sexual misconduct, alcohol played a role — a reminder that perpetrators often use alcohol as a weapon.

The full results of the survey are available here: allin.tulane.edu.

While some might fold under the pressure of such news, university administrators, faculty and staff sprang into action seeking ways to improve the Tulane experience.

Fitts said, “Progress demands tackling difficult discussions made only through the participation of everyone on campus.”

‘All In Together’
An early initiative by the university was the introduction of Project IX: Student Design to End Sexual Assault, a one-credit seminar offered by the Phyllis M. Taylor Center for Social Innovation and Design Thinking in spring 2018. The course extended an opportunity for students to step up and provide their own ideas for solutions to issues of sexual violence.

As a final project, the students presented their ideas to university administrators including Assistant Provost for Title IX Compliance Meredith Smith and President Fitts.

“Hearing ideas directly from the students put a new energy into all the work we do,” said Smith in response to the presentations. “Today, several of the student proposals are being put into action.”

For instance, the Title IX office paired with students to create a choose-your-own-adventure style web tool designed to help students determine what resources they need to support themselves or a friend following sexual violence.

Members of the Office of Student Conduct were so impressed with the students’ ideas that they teamed up with a group to create a training module for aspiring peer advocates on campus.

Case Management and Victim Support Services aided students in the creation of the Supportal App — a place where victims of sexual violence can find resources such as reporting options and other campus assistance.

The Project IX course has been offered again this year resulting in a continuous flow of ideas from students to university administrators.

To aid in that change, Campus Health has restructured its education and prevention efforts to ensure multiple touch points when communicating with students.

“The first part of our efforts was to educate new students before they arrive, during orientation and then several times during fall semester,” said Tims, who adds that the university’s creation of the All In website offered a valuable resource in providing information and transparency.

“We also created a student coalition that allows students to use funding we provide to establish their own programming and to give them a voice,” said Tims. “We needed to have a pipeline so that student engagement was there.”

Tulane student Allison Foster, who serves as the Undergraduate Student Government director of Student Health and Wellness, is a part of the student coalition.

“I believe the climate survey forced administration and students to admit that there was an epidemic of sexual violence on campus,” said Foster, a junior studying homeland security and public health. “Things that went on behind the shadows became harder to ignore and there was now data to support survivors’ stories.”

Foster said the formation of the student coalition is evidence that Tulane is serious about preventing sexual assault and making students feel supported by the university.

‘We Are All Involved’
The annual President’s Convocation is the day that students become “official Tulanians” as they are welcomed into the university community by the president, provost, deans and administrators.

As Dusty Porter, vice president of student affairs, gave his welcome to the newest crop of students in McAlister Auditorium during this fall’s convocation, he encouraged the incoming class to be a part of the solution in stopping sexual violence on campus. His remarks were greeted with loud applause from the assembled students.

“You have made a wonderful decision to enroll at Tulane, to join in the life and culture of this magnificently rich, diverse academic community and this iconic American city. But more decisions await you.

“One of the most important of these is deciding what Tulane’s motto — Not for One’s Self, But for One’s Own — means to you. This motto reminds all of us about the care and safety that we strive to provide for each and every one of you.

“During your time here at Tulane, I’d like to ask you to embrace this motto and contribute to a positive campus culture.

This fall we are rolling out new programs to help prevent sexual violence and we need you to be part of the solution to create lasting change.