When Sandra Karp helped N.O. women ‘Take Back the Night’ 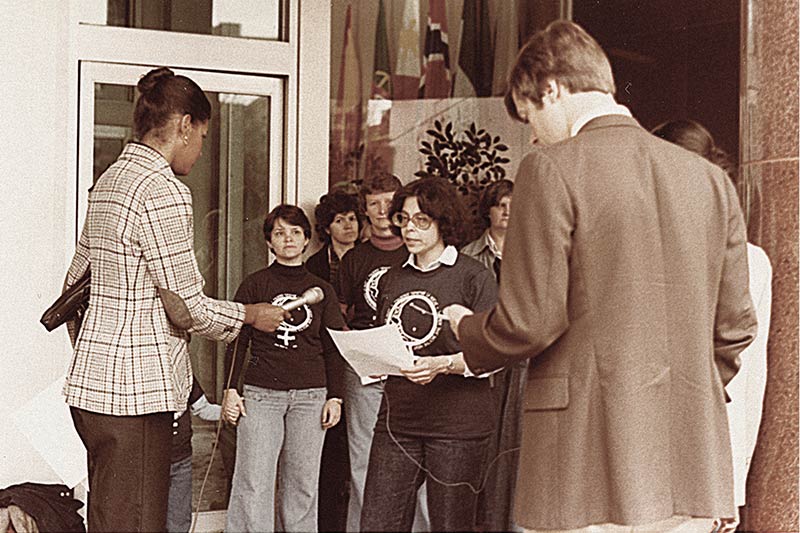 In 1980, alumna Sandra Karp (center) spoke to the media about the event she helped organize, Take Back the Night, a march to protest violence against women. The event is still held today. (Photo provided by Newcomb College Archives)

“It was a thrilling event,” recalled Sandra Karp (G ’78), an organizer of the Take Back the Night march, the first of its kind in New Orleans.

“We were an energetic, focused group,” said Karp. “And we were disciplined, even the police said so.”

Janet Allured in Remapping Second-Wave Feminism: The Long Women’s Rights Movement in Louisiana, 1950–1997 wrote that at a press conference the day before, Karp “explained that threats of violence curtailed women’s freedom of movement.” (Allured did much of her research at the Newcomb Archives of the Newcomb College Institute.)

Karp also “presented a report to city officials outlining what the city and others could do to combat violence against women.” These proposals included a “clearinghouse of information and referrals to agencies that could help female victims who did not know where to turn following an attack.”

“It was an amazing, hopeful time. Our intent was to make the world a better place.”


The main goal of the marchers was “to signify their strength in numbers and their refusal to limit their mobility,” wrote Allured.

The march from St. Mark’s Community Center on Rampart Street through the French Quarter, down Bourbon Street, to end with a rally at Washington Square “exceeded my expectations in size and enthusiasm,” said Karp.

“It was an amazing, hopeful time,” she said. “Our intent was to make the world a better place.”

And she believes the marchers did succeed in bringing attention and action toward curbing violence against women. The march was “a small step with important repercussions.”

Karp, who earned her PhD in history, has a significant place in the women’s liberation movement in New Orleans—and Tulane. While a graduate student, she was a co-founder of Tulane Women for Change, a group recognized by the faculty University Senate in 1971. Tulane Women for Change acknowledged and supported women who aspired to “serious, scholarly careers.” Today she lives in Easthampton, Massachusetts, where she is writing a book, Origins, about evolution from a sensory perspective.

The tradition of Take Back the Night continues today in New Orleans. Tulane students participate along with students from other New Orleans universities in the annual candlelight march.

This story originally appeared in the March 2017 issue of Tulane magazine.