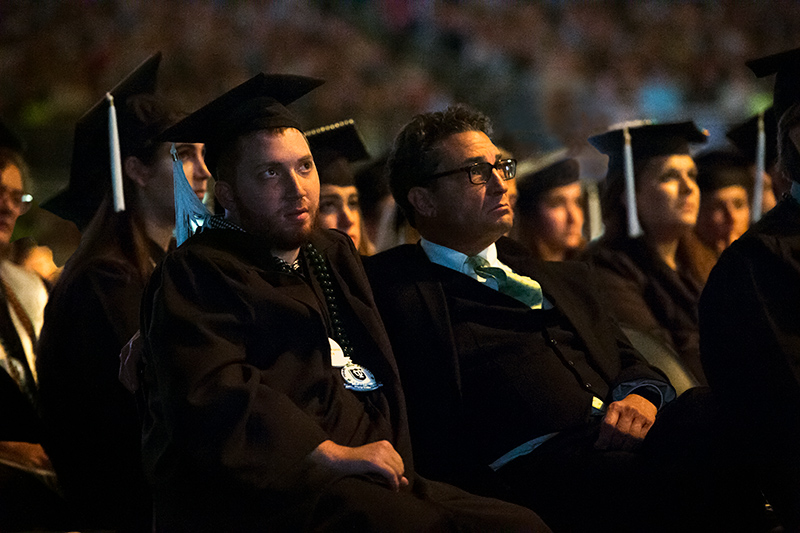 Ben Alexander, left, sits next to his father, Dr. Sam Alexander, at Tulane Commencement May 19. Ben is autistic and nonverbal. His father accompanied him to every class since 2014. (Photo by Paula Burch-Celentano)

As Tulane University’s graduates filed onto the floor of the Mercedes-Benz Superdome May 19, there may have been no one more jubilant, no one prouder than Dr. Sam Alexander. But unlike those surrounding him, he wasn’t donning a robe or mortarboard, and he wasn’t looking ahead to his first job. He did that a long time ago.

Alexander, an obstetrician-gynecologist, was escorting his son Ben, who was about to graduate from college – an achievement that he and his wife, Dr. Ellen Schneider, an ophthalmologist, always dreamed of but never thought possible, despite his intelligence and gift for writing.

Ben is both autistic and nonverbal. He was accepted to all four colleges to which he applied, with Tulane showing the most interest through a generous scholarship.

“The truth is that Ben would likely not even be at Tulane if it weren't for the constant and unwavering support of his father, Dr. Sam Alexander.”

Patrick Randolph, director of the Goldman Center for Student Accessibility

“We were totally blown away with how accepting Tulane was,” Schneider said.

That acceptance continued over the next four years, among students and professors alike. Alexander witnessed that for himself, having been at Ben’s side every step of the way, from Jesmyn Ward’s creative writing class to Thomas Beller’s English class to Rebecca Mark’s Southern literature class.

When Ben, who communicates via computer, felt overwhelmed, professors would sit him down and offer words of encouragement. Students were equally supportive as was his adviser, Sarah Montes.

“I always wanted Ben to have the same opportunities that his two siblings had,” Alexander said. “Obviously I wish he could have gone by himself, without his father hanging all over him. But what a wonderful experience it was.”

Patrick Randolph, director of the Goldman Center for Student Accessibility at Tulane, said that experience would not that have been possible without Alexander’s unwavering devotion to Ben, who because of motor coordination and control issues depended on his father to help orient him to the classroom.

“It is easy to see how lucky Ben is to have a such a thoughtful and caring father to walk by his side throughout every step of his personal journey,” Randolph said.

He said the father-son’s presence gave countless students, faculty and staff “the opportunity to grow and learn from Ben’s unique and thoughtful perspective” and also provided a roadmap for the growing number of students with autism-spectrum disorders who have since enrolled at Tulane.

At the Newcomb-Tulane College Senior Awards Ceremony May 18, Ben received an award for outstanding accomplishment in Jewish Studies. Dean James MacLaren singled out his parents, especially Alexander, for their tireless efforts on Ben’s behalf.

Ben, who received a bachelor of arts degree in English and Jewish Studies from the School of Liberal Arts, plans to pursue a career in writing. He described his gratitude to Tulane in a recently published article in ViaNolaVie. “So what does having a degree from Tulane do for me? It says that despite having autism, I can be like anyone else…To those of you who have supported me, I say a big thank you.”