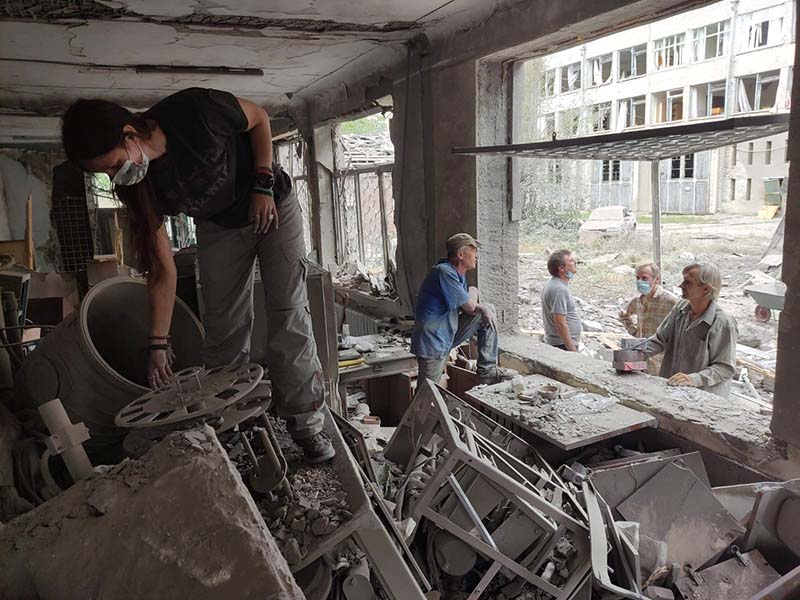 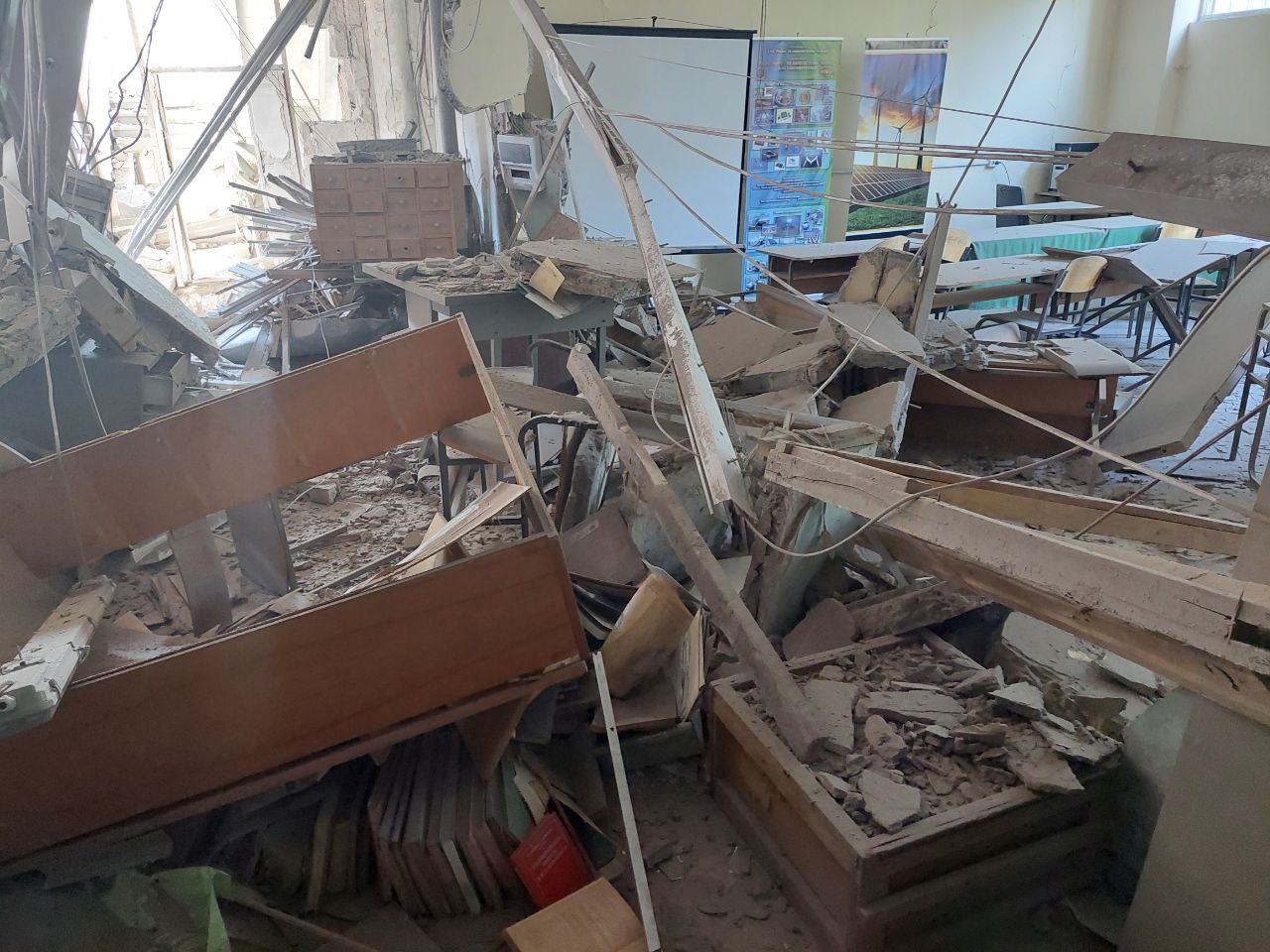 The aftermath of the missile strike.

The ongoing war in Ukraine hasn’t stopped a Ukrainian university from collaborating with Tulane University scientists and engineers, even after its research labs were reduced to rubble in the conflict.

Tulane recently signed a memorandum of understanding with Kharkiv Polytechnic Institute (KhPI) in Kharkiv to collaborate with faculty from Tulane School of Science and Engineering in the fields of science, engineering and technology. Administered by the Tulane Provost’s Office, the collaboration will span several technical fields and include research projects, curriculum development and teaching.

"Just one day after that phone call, a modified surface-to-air missile directly hit their building, killing a night guard."

The five-year partnership came about through the efforts of physicist Denys Bondar, PhD, a Ukraine native and assistant professor in the Tulane Department of Physics and Engineering Physics. Bondar had learned that the KhPI physicists were doing similar research in solar energy, signal processing and other areas of physics. But it wasn’t until he contacted them by phone that he discovered how much.

“To my surprise, there was significant research overlap between the Tulane and KhPI teams,” Bondar said. “We discussed ways we could work together. The call was most substantive and productive, and we decided to move forward with a collaboration.

“But the Russian army had a different plan. Just one day after that phone call, a modified surface-to-air missile directly hit their building, killing a night guard. After two days, the people with whom we had talked sent us the most disturbing photos. I was furious and depressed.”

The missile struck the three-story building with such force that windows were blown out. Chunks of cement covered the ground along with tiny pieces of plaster and glass. The interior had been transformed into a pile of rubble, with walls collapsed, furniture toppled and lab equipment buried beneath the debris.

Because the bombing took place at night when the building was empty, there were no other casualties. But the KhPI team’s research labs in the building, part of a satellite campus away from the main campus and about 25 miles from the Russian border, were totally devastated.

“The destruction was terrible,” said Kseniia Minakova, PhD, an associate professor of physics at KhPI. “We were left without a department, or rather without walls and ceilings, because a department is not about walls, it’s about the people who work there.”

With the collaboration in question, Bondar and Matthew Escarra, PhD, an associate professor in physics and engineering physics, reached out to their colleagues in Ukraine to see what they could do to help. Thankfully, they were relocated to a new building and were able to salvage much of their equipment and research. But they still needed help.

“With Matt’s prompt coordination, I used my personal funds to buy some critically needed electronics equipment. We provided things like a solar power meter and a thermal imaging camera.”

The Escarra Group works with very high-efficiency solar cells similar to the ones needed by the KhPI team. Escarra spent time in his lab going through samples and packaged 16 such cells to send to Ukraine, praying that they made it there without getting damaged.

“I’ve been obsessively following the Ukraine situation,” said Escarra, whose brother lives in Switzerland and has housed a Ukrainian refugee for months. “As a spectator, you feel helpless. When I saw the pictures of their lab, I really feared the worst, that they would have to start all over. So, when they reached out to us, I immediately said, ‘Yes. We want to help.’”

Minakova and her team were overwhelmed by Tulane’s support. “That’s something we could not have imagined,” she said. “Just when it seemed like our scientific activity could have stopped, they resolutely expressed their desire to help.”

Their generosity is enabling the collaboration to proceed as planned, and Associate Provost for International Affairs Laila Hlass said it has all the makings for a successful and meaningful academic experience.

“We’re thrilled that the School of Science and Engineering has begun working with Kharkiv Polytechnic to build upon the significant joint research interests of our faculties in the sciences,” she said.

“These types of initiatives enable us to develop the bold ideas and solutions we need to meet the pressing challenges of the day. They extend the reach of our work and multiply the impact, and often have far-reaching benefits for both institutions that go beyond the specific research project.”

Already the two universities have applied for a joint grant from the U.S. Embassy in Ukraine in the field of alternative energy.  Minakova said the grant will enable students to learn from some of the world’s leading experts in renewable energy.

“In spite of everything,” she said, “Ukrainian science continues to thrive, and we can’t thank Tulane enough.”

Bondar, who has family living in western Ukraine, said he is equally grateful to his Tulane colleagues for their willingness to help.

“It was an overwhelmingly positive response,” he said. “People really wanted to help, and not just because I was asking. This is truly the embodiment of Tulane’s motto: ‘Not for oneself, but for one’s own.’” 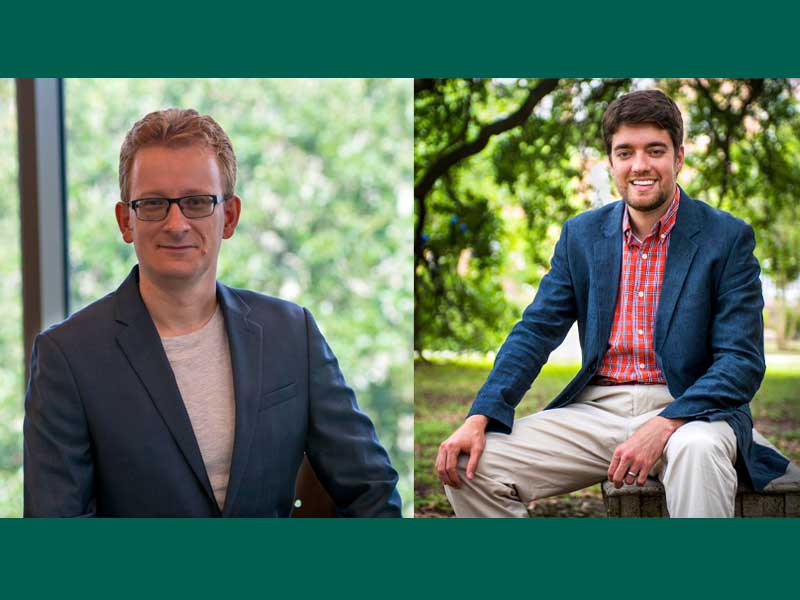