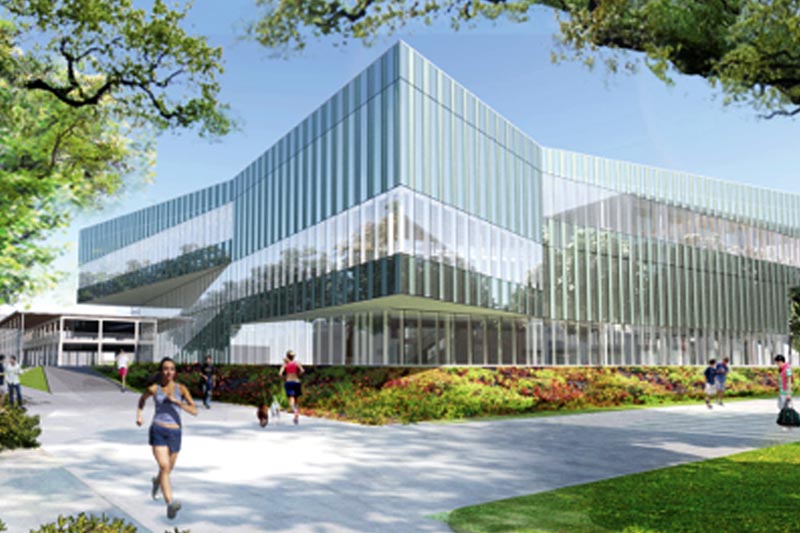 This architectural rendering shows what The Commons will look like upon completion.

Tulane University has begun construction on a new gathering space for the entire Tulane community, which President Mike Fitts has declared “spectacular.” The Commons, which is scheduled to open in 2019 in the heart of Tulane’s uptown campus, is a three-story, $55 million, 77,000-square-foot marvel that will house a new dining hall, multipurpose meeting spaces and a permanent home for the Newcomb College Institute (NCI). It will provide a gathering place for students to come together with faculty and staff, help broaden the intellectual life of the university and build an even stronger sense of Tulane community.

Located across from Howard-Tilton Memorial Library, The Commons will connect to the western end of the Lavin-Bernick Center (LBC) with a second-floor walkway. Two floors of the new facility will offer multiple dining options and 1,100 seats for eating, studying and conversation. The Commons will also include ample space for programs hosted by student organizations and residential colleges and will be open late to accommodate students' schedules.

“At their best, universities bring together people from every corner of the world and connect them in the most unexpected ways. Spaces like The Commons create these moments of synchronicity, where ideas are born and problems are solved," says Tulane president Mike Fitts. “This will be a center of campus life, for the students who eat and study there, and for the extraordinary work of the Newcomb College Institute.”

The Commons places all of the operations of the Newcomb College Institute in a single location at the center of campus life. The institute’s new space on the third floor will feature an open-air courtyard, an area for archives and special collections, a library with a dedicated reading room, a beautiful event space and offices for the Newcomb Alumnae Association.

In addition to NCI programs, the NCI space will expand programming opportunities for other student groups, relieving demands on the often fully booked LBC.

With the opening of The Commons next year, plans call for Bruff Commons to eventually be demolished to make room for the beginnings of the new campus housing plan, which will create a more cohesive and engaged residential campus. Fundraising for The Commons project is ongoing and there are special naming options still available.