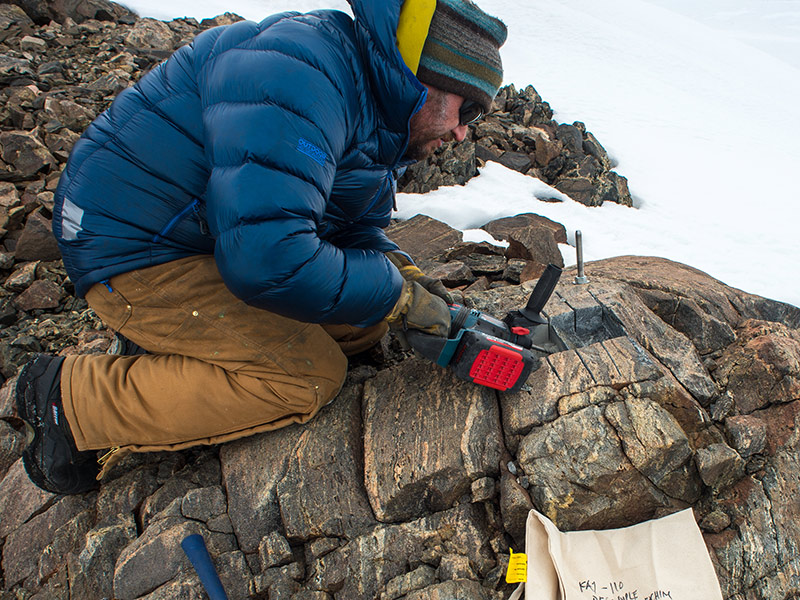 Tulane geologist Brent Goehring collects surface rocks at Thwaites Glacier in West Antarctica as part of a five-year study on sea-level change in the Thwaites Glacier system. (Photo by Greg Balco, a glacial geologist with the Berkeley Geochronology Center)

The massive Thwaites Glacier, on the continent of Antarctica, is more than 7,000 miles from Blessey Hall, the Tulane University building where geologist Brent Goehring teaches such classes as Isotopes in the Environment, Geologic Dating Methods and Physical Geology.

But the Thwaites Glacier— a Florida-sized mass of ice that is melting at nearly twice the rate it did in the mid-1990s — is where Goehring spends part of the year studying how the glacier may be contributing to global sea-level rise.

Goehring, the Arnold Early Career Professor in the Tulane School of Science and Engineering, recently returned from a two-month journey to Antarctica as part of the International Thwaites Glacier Collaboration, a $50 million U.S.-U.K. initiative considered one of the most detailed and extensive examinations of a massive Antarctic glacier ever undertaken.

“We know (Thwaites) is melting. We know it’s shrinking. But how much? How fast? The best models incorporate what happened in the past. And that’s where I come in as a geologist."

“We know it’s melting,” Goehring said. “We know it’s shrinking. But how much? How fast? You can try to say what‘s going to happen in the future with models, and the best models incorporate what happened in the past. And that’s where I come in as a geologist.”

Goehring is a principal investigator on the Geological History Constraints (GHC) project, one of eight projects that make up the collaboration. The team’s mission is to gather information about past ice sheet behavior and relative sea-level change in the Thwaites Glacier system.

The work involves drilling through the ice into the underlying bedrock to measure cosmogenic nuclides, specifically a form of radiocarbon that accumulates in rocks at the Earth’s surface but is otherwise absent. The measurements will indicate how much thinner Thwaites was potentially over the past 5,000 years, and under what conditions it might have grown, Goehring said.

Goehring traveled to Antarctica by way of New Zealand, and with other members of his team, spent the first part of the trip at the McMurdo Research Station, the logistics hub of the U.S. Antarctic Program.

Given that Thwaites is one of the most remote and forbidding places in the world, scientists spent much of their time in training. For example, the team had to undergo crevasse rescue training to make sure they were prepared should someone get trapped. They also engaged in survival, snowmobile and glacier travel training.

“You do lots of training,” Goehring said. “It’s annoying at the beginning of the season. But if things were to go wrong you’d be happy to have that training.”

From McMurdo, they flew by LC-130, a ski-equipped military transport aircraft, to the West Antarctic Ice Sheet Divide camp. After a one-week blizzard delay, they made it to Thwaites on an aircraft known as a Twin Otter.

“All told it took a few weeks to get into the field,” he said. “Once the Twin Otter leaves, you’re on your own. I find it peaceful. You’re not going to sign up for this if isolation is not part of your repertoire.”

The team spent 15 days at Thwaites, drilling around 45 minutes a day in 14-degree weather. The complex process of setting up the drill occupied much of their time along with troubleshooting when things didn’t go quite as planned.

“Everything I measure is at its greatest quantity right after the rock and air interface — where the two meet at the surface,” he said.

The team collected four rock cores, each about 10 feet long, and packed them in plywood boxes for eventual travel to Goehring’s Tulane lab and a similar lab in the U.K., for further study. He and a group of students will return to Antarctica later this year to continue their research.

“Ultimately, what we want to know is how much smaller Thwaites is now compared to last 5,000 years,” he said. “If it was smaller and then regrew, it could mean that the current retreat is reversible, which is really important to the sea-level question.”