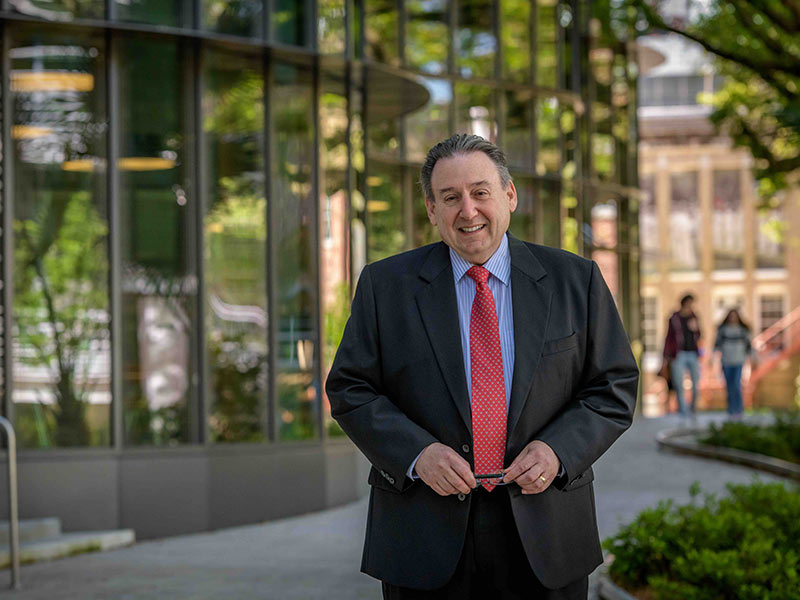 Dean Ira Solomon has announced his plans to step down this summer at the end of his second five-year term. Photo by Jackson Hill.

After leading the A. B. Freeman School of Business at Tulane University through a substantial period of growth during the last nine years, Dean Ira Solomon has announced his plans to step down this summer at the end of his second five-year term.

“Together, we have accomplished a great deal over the nine-plus years,” Solomon said in a letter to the Freeman community.  “And despite the challenges posed by the COVID-19 pandemic, I am expecting the remainder of the academic year 2020-2021 to be another period of great accomplishment.”

Solomon spearheaded the transformation of the school’s home into the Goldring/Woldenberg Business Complex, a spacious and modern learning environment designed to significantly enhance the student experience at Freeman. The $35 million project united the school’s two buildings on campus with more than 80,000 square feet of new or renovated space to meet growing demand for space as the number of undergraduate majors in the business school grew by more than 60 percent during Solomon’s tenure.

Freeman’s footprint into downtown New Orleans also expanded with the 2019 opening of the Stewart Center CBD, the school’s home for executive education programs in the Central Business District. The 21,000-square-foot space enabled Freeman to create new programs for working professionals as well as graduate and undergraduate students.

Under Solomon’s direction, the school also increased its support for the region’s entrepreneurial ecosystem with the launch of the Albert Lepage Center for Entrepreneurship and Innovation. The center, which has been a partner in New Orleans Entrepreneur Week, consolidated and expanded Freeman’s coursework, academic research and student programming in entrepreneurship.

“Ira’s dedication to excellence and his passion for Tulane has put the Freeman School on an exciting pathway for the future,” said President Michael A. Fitts. “I have no doubt that we will see the benefits of Ira’s hard work for many years to come as Freeman’s stature among the nation’s premier business schools continues to grow.”

Tulane Senior Vice President for Academic Affairs and Provost Robin Forman noted numerous other accomplishments by Solomon during his time at Tulane.

“Ira greatly increased the Freeman School’s research presence in the nation’s top business journals, expanded global partnerships, increased the number of graduate and joint-degree programs and oversaw the school’s recent re-accreditation with the Association to Advance Collegiate Schools of Business,” Forman said. “The entire Tulane community will miss his leadership.”