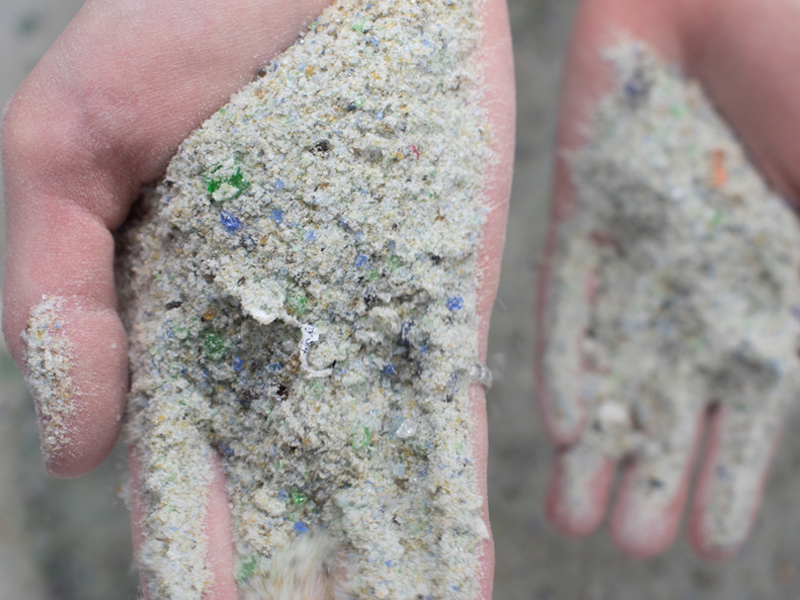 Glass Half Full NOLA collects and converts glass bottles into sand and glass cullet, which can be used for coastal restoration, flood prevention, eco-construction and new glass. (Photo courtesy of Max Steitz)

For almost his entire time as a student at Tulane University, Max Steitz and his friends could not understand why New Orleans, or the state of Louisiana for that matter, did not have a glass recycling facility.  It killed them to toss empty glass bottles in the trash every time they socialized, but they had no other choice.

“It felt very wrong that we were contributing to the (environmental) problem,” said Steitz, a New York City native and international development major. “Finally, a few years later, we’re sitting in the backyard and we just said, ‘Enough is enough.’ We wanted to help solve these really pressing issues facing Louisiana, especially coastal erosion.”

They dove deep into research and fundraising, and a few months later, Glass Half Full NOLA was born. Located at 911 Joliet St. at Leake Avenue, the facility recycles glass into sand and glass cullet for disaster relief, coastal restoration, eco-construction and new glass.

“What we found very quickly is that there is more interest from the community than we ever knew existed. Never did we expect the New Orleans community to take this on as they have.”

Max Steitz, Tulane senior and founder and co-director of Glass Half Full NOLA

The response to the center was overwhelming, far beyond the expectations of Steitz and his two partners, Franziska Trautmann, a Tulane senior majoring in chemical engineering, and another friend, Benjamin Bagwill, director of operations. In just a few weeks, they collected more than 50,000 pounds of glass. As of now, they are collecting about 60,000 bottles a week.

“What we found very quickly is that there is more interest from the community than we ever knew existed,” Steitz said. “Never did we expect the New Orleans community to take this on as they have.”

The interest was so strong, in fact, that they opened a second glass drop-off hub at 3935 Louisa St. in New Orleans East. Now they hope to take Glass Half Full NOLA to the next level and have begun a crowdfunding campaign to raise $100,000. The money would enable them to modernize the facility with upgraded glass-crushing equipment as well as expand operations throughout Louisiana. Currently, with the help of volunteers, they do most of the work by hand.

“This hand-driven process takes a toll on us and is not the answer to efficiently recycle all of Louisiana's glass, “ the team wrote on its Go Fund Me page.

A month into the campaign, they have raised nearly $42,000 from 788 donors. Many of the donors left expressions of gratitude on the page.

“One bottle at a time, we can all make a difference, and save our planet,” wrote one donor.

“This city needs this, this state needs this,” wrote another. “Thank you.”

“Moving to New Orleans, I was shocked at the lack of recycling options,” said another donor. “This is such an amazing step forward. Thank you for making change happen.”

Steitz said his partners and the entire Glass Half Full NOLA team deserve major props for their role in launching the facility. They include Annie Birkentall, chief financial officer; Benjamin Grossman, director of financial planning; and Dalton Smith, director of financial operations. Lee Gary, an adjunct assistant professor for international development studies at Tulane, serves as an advisor, along with three other advisors.

Steitz said it is that team of advisors, volunteers and students that has made Glass Half Full NOLA so successful. “We simply would not be here without the outpouring of support from both the New Orleans and Tulane communities,” Steitz said.