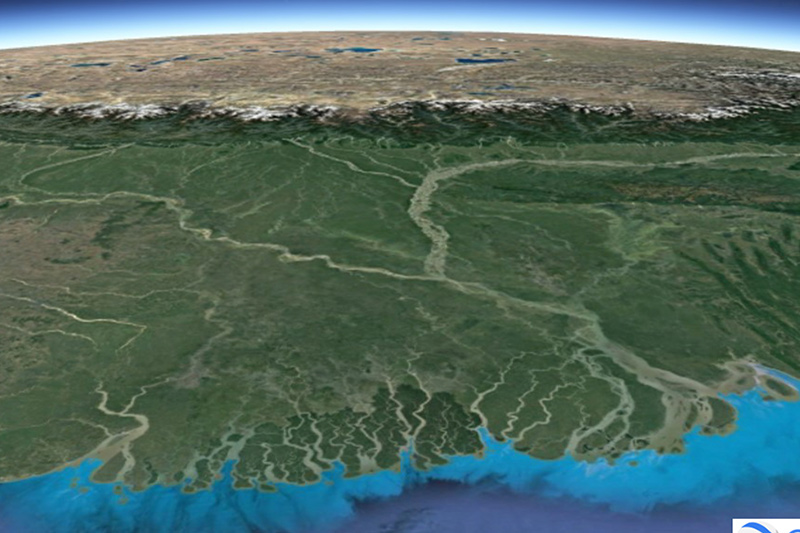 Oblique view of the heavily tide-influenced Ganges-Brahmaputra Delta in Bangladesh, with Himalayas in the background.. (Google Earth photo)

A new study of nearly every delta on the planet shows how river delta shapes and sizes around the world are changing due to human activity – both for the good and bad.

The study, carried out by a Dutch/American team that includes present and former Tulane University researchers, demonstrates how the interaction of river flow, waves and tides can transform the shape of river mouths and their associated deltas, including land gain and loss. The study reveals that many deltas globally are still building land today, but that this trend is unlikely to continue due to the acceleration of sea-level rise and other human-induced impacts.

The new paper, published in Nature, considers about 11,000 deltas worldwide and takes advantage of the wealth of information that is presently available from global datasets on river drainage basins, sediment fluxes, wave climate and tidal range, among others.

“Our study shows that worldwide, river delta growth is currently outpacing decline, but this is unlikely to continue in the future when sea-level rise accelerates.”

“One of the exciting aspects of this study is that it offers a novel and fully quantitative way to predict delta shape based on newly developed theory,” said Torbjörn Törnqvist, Vokes Geology Professor at Tulane and co-author of the paper.

The lead author, Jaap Nienhuis, an assistant professor at Utrecht University in The Netherlands, developed the portion of the theory that predicts the effect of tidal influence on deltas while he was a postdoc in Törnqvist’s group at Tulane.

The researchers use a recently developed tool known as the Aqua Monitor to determine land loss and land gain over the past 30 years from satellite imagery. While this shows that about 1,000 deltas worldwide, including the Mississippi Delta, are losing land, about 1,500, most of which are located in Southeast Asia, are actually growing due to increased sediment delivery. This is mainly due to deforestation that increases erosion rates.

The study also offers a piece of information that is of particular interest for regions — such as the Mississippi Delta — that seek to rebuild coastal land. On average, for every square foot of new land, about 150 cubic feet of sediment is needed.

In addition to Tulane and Utrecht universities, the authors of the study are based at Woods Hole Oceanographic Institution, Indiana University, Wageningen University, the University of Colorado at Boulder and Los Alamos National Laboratory. The US National Science Foundation contributed funding to this project.