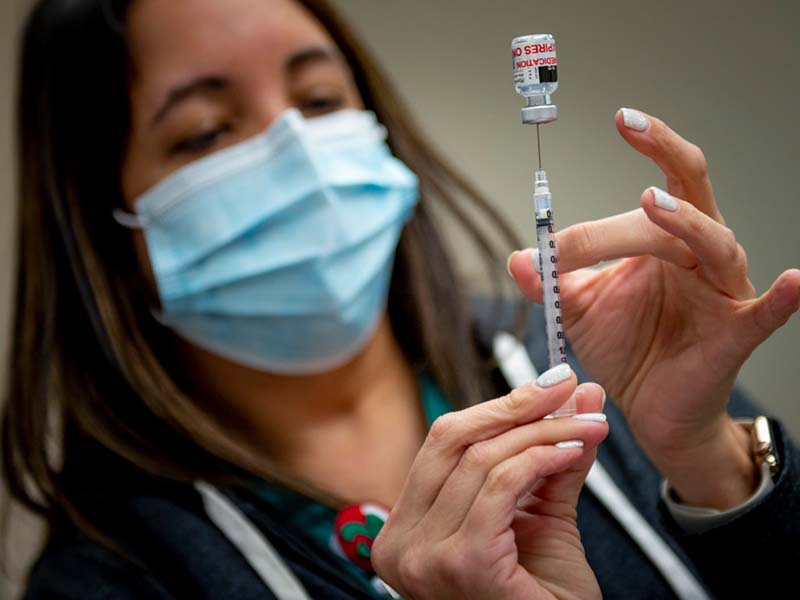 The study was launched shortly after the COVID-19 vaccines became widely available in 2021 when people began reporting on social media about changes in menstrual cycles after receiving the vaccine.

A new study confirms what many on social media have long reported: The COVID-19 vaccines did affect people’s periods, especially for those who don’t typically have them due to long-acting contraceptives, gender-affirming hormone treatments or menopause.

The study, which was co-authored by a Tulane University biological anthropologist, found that 42% of respondents with regular menstrual cycles bled more heavily than usual, while 44% reported no change after being vaccinated. Among those who participated in the study who typically do not menstruate, 71% of people on long-acting reversible contraceptives, 39% of people on gender-affirming hormones and 66% of postmenopausal people reported breakthrough bleeding.

"We suspect that for most people the changes associated with SARS-CoV-2 vaccination are short-term, and we encourage anyone who is worried to contact their doctor for further care,” said first author Katharine Lee, assistant professor of anthropology at Tulane University School of Liberal Arts. “We want to reiterate that getting the vaccine is one of the best ways to prevent getting very sick with COVID, and we know that having COVID itself can lead not only to changes in periods, but also hospitalization, long COVID and death.”

The study, which was published in the journal Science Advances, was led by Lee and Kathryn Clancy, a professor of anthropology at the University of Illinois Urbana-Champaign.

The analysis of reports from more than 35,000 people is the most comprehensive assessment so far of menstrual changes experienced by pre- and post-menopausal individuals in the first two weeks after receiving the SARS-CoV-2 vaccine.  However, the authors caution that because the opt-in survey relied on self-reported experiences, it cannot establish causality or be seen as predictive of people in the general population.

The study was launched shortly after the COVID-19 vaccines became widely available in 2021 when people began reporting on social media about changes in menstrual cycles after receiving the vaccine. There was little information about the issue as clinical trials for the vaccines didn’t ask participants about it. Doctors who weighed in on the subject after hearing early reports were often dismissive of patients’ concerns with some saying it was unclear how a vaccine could trigger such changes, Lee said.

However, other vaccines – including those for typhoid, Hepatitis B and HPV – are sometimes associated with changes in menstruation, Clancy said. These side effects are believed to be tied to an uptick in immune-related inflammatory pathways and are less likely to be driven by hormonal changes.

Lee hopes that future clinical trials for vaccines will include questions about changes in menstruation along with other possible side effects.

“We’d love to see future vaccine testing protocols incorporate questions about menstruation that go beyond screening for pregnancy,” Lee said. “Menstruation is a regular process that responds to all kinds of immune and energetic stressors, and people notice changes to their bleeding patterns, yet we don’t tend to talk about it publicly.”