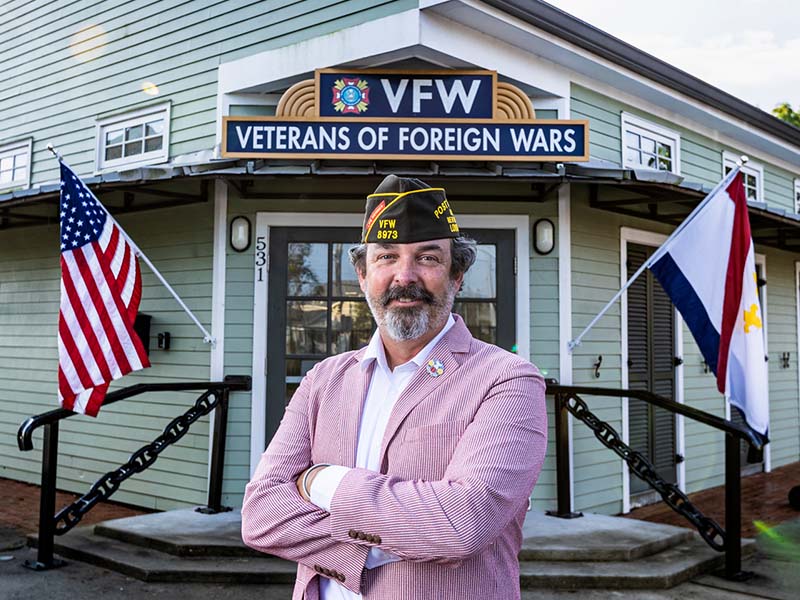 A marine veteran of 23 years, Chris Cox came to New Orleans in 2010 and never left. As a recent SoPA graduate, Cox is giving back to his alma mater by supporting military veterans in Tulane’s student body as commander of a local VFW post. (Photo by Rusty Costanza)

Chris Cox amassed numerous titles, zip codes and even bylines during his 23 years of service in the United States Marine Corps, but an assignment to New Orleans late in his career proved to be too much for the master sergeant to overcome when it was time to leave.

In 2010, Cox was the 3rd Marine Division public affairs chief stationed in Okinawa, Japan. That year, he was up for promotion and given his choice of orders: Honolulu or New Orleans.

“I had never been to New Orleans or known anything about it, other than what everybody hears outside of our little bubble,” said Cox. “I thought I could help the Marine Forces Reserve in New Orleans from a public affairs/public relations standpoint. I wanted to go there and see if I could do some good for them.”

“My goal, as the commander for the NOLA VFW post, is to help support the men and women who've already done an awful lot of stuff for our country and are just trying to improve themselves and be well adjusted and successful.”

Fast-forward to 2014, and Cox was again up for promotion, but there were no options this time. His new assignment would be at the Pentagon in Washington, D.C.

“I did not want to leave New Orleans, so I immediately submitted my retirement paperwork. That's how I ended up staying in NOLA. That same year, I enrolled in Tulane’s School of Professional Advancement (SoPA) and started pursuing undergraduate degrees in public relations and emergency management. I graduated with a double-major in 2018,” Cox said.

Cox joined New Orleans’ Veterans Administration (VA) Medical Center to continue his public affairs career in 2014. Four years later, he was promoted to his current role as a strategic communications specialist in the VA’s Office of Community Care.

Cox recently added another title to his resume, one that’s close to his heart. On June 1, 2021, Cox began his one-year stint as commander of the Alfred E. Flynn Veterans of Foreign Wars Post 8973 in New Orleans’ uptown neighborhood.

“Veterans come in different shapes, sizes and colors, and the VFW is not a source for anything other than providing answers to the questions of our veterans. It’s a source of knowledge and experience for people who have gone through what a lot of these younger service members, who are just transitioning out, are going through. Its underlying purpose is to be the place veterans call or go for answers to problems that are common,” Cox said.

During Cox’s time as a Tulane undergraduate student, his SoPA advisor was Michael Wallace, director of Tulane’s Emergency and Security Studies Program and Navy veteran. Cox and Wallace have joined forces to assist Tulane’s growing number of military veterans in its student body.

“I've known Mike Wallace for years, and, through the VA, I am working with him to try and provide resources and support for veterans on campus. Veterans have been responsible for millions of dollars’ worth of equipment, their lives and the lives of the people around them. However, it can be challenging for some veterans to relate when mixing and mingling with some of the younger undergraduate students. My goal, as the commander for the NOLA VFW post, is to help support the men and women who've already done an awful lot of stuff for our country and are just trying to improve themselves and be well adjusted and successful,” Cox said.

“Chris epitomizes the senior enlisted ethos of taking care of others before oneself. Whether they’re Marines, VA employees and patients, veterans and student veterans, he’s always there to help assist and give 110 percent. I am extremely proud of him as a Tulane alum, this year’s VFW Post Commander and as a friend,” said Wallace.

Cox has spent much of his life serving others, including one president. Born in Houston, Texas, Cox grew up in Olympia, Washington, and briefly attended North Idaho College on a track and field and cross-country scholarship. During his college days, he had several part-time jobs, including a gig as a weekend radio disc jockey at KCDA in Coeur d’Alene, Idaho. This job proved to be a difference-maker for Cox.

When Cox enlisted in the Marine Corps in 1990, one recruiter noticed Cox’s athleticism and experience as a “radio guy” and spurred Cox down a career path in public affairs, and he eventually became a writer. His stories have been published in the Los Angeles Times, Washington Post, Men's Health and Soldier of Fortune magazines. He has written for the federal government as a public affairs person since 1991. Cox’s public affairs experience allowed him to exercise his craft alongside military and diplomatic professionals from 20 different nations.

“I joined the Marines during Desert Storm and graduated boot camp five days after Desert Storm ended. I thought I had missed my opportunity to perform great things for a nation. But 23 years later, I have a whole bunch of things that I did,” Cox said.

Cox has coordinated numerous events during his career, including Congressional Gold Medal ceremonies and the first 24-hours of President Gerald Ford’s state funeral in 2006.

“I was a gunnery sergeant and a public affairs chief when President Ford died at his home in California. We got a call stating the president had just died, and we needed to activate the Joint Information Bureau, which oversees communication and media needs for presidential funeral services. I had seven Marines in my group, and we credentialed media from around the world and set up the media platform outside the church in Cathedral City, California, where President Ford was going to be for the mourning period. I did not sleep for 24 hours. Afterward, the Ford family reached out to me personally and thanked me in a letter for my efforts,” Cox said.

Cox said living in New Orleans and being a member of the Tulane family has impacted his life as much as being a Marine. Living in a community where mutual support, respect and service to others is part of everyday life is a unique and special experience – one that he believes is his luckiest break.