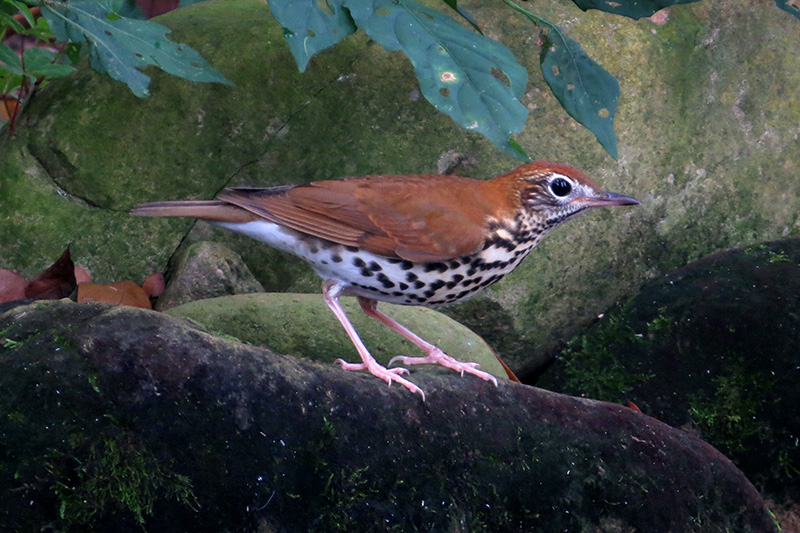 The decline of the wood thrush is the subject of a study by population ecologist Caz Taylor. (Photo by Richard Hall)

A Tulane University researcher who studies bird migration has found that a decline in the number of wood thrushes is probably due to deforestation in Central America, not to the loss and degrading of forest in the United States where the songbird breeds.

The study by Caz Taylor, an associate professor in the Tulane Department of Ecology and Evolutionary Biology, was published Nov. 6 in the open-access journal Scientific Reports.

Wood thrushes breed in the forests of the eastern United States and migrate in the winter to the forests of Central America. Although they remain a relatively common bird, the species has been declining rapidly since the early 1970s and several researchers have suggested that fragmentation of forests in breeding grounds are playing a major role.

"Many (migratory birds) are declining and to conserve them effectively, we have to think outside U.S. borders - we can't save wood thrush or other migrants by only protecting forests in the U.S."

In the new study, Taylor examines how breeding forest fragmentation relates to the shape and strength of density-dependence or how dwindling resources limit bird population.  She was surprised to find that declines were more severe in regions where the forest was the least fragmented.

“This demonstrates that while wood thrushes are sensitive to breeding forest fragmentation, it is not the main cause of declines, rather the loss and/or degradation of habitat in the winter range in Central America is the culprit,” Taylor said.

Taylor in collaboration with Bridget Stutchbury, a leading expert on songbirds, reached that same conclusion through a demographic model of the wood thrush population covering the entire network of wintering and breeding regions. That study was published in 2016 in the journal Ecological Applications.

To delve further into how winter habitat affects songbirds, Taylor has recruited a new doctoral student, Fabiola Rodriguez of Honduras to study wood thrush during the over-wintering period in these critical Central American forests. Rodriguez wanted to conduct research in her home country and believes this opportunity will provide a platform for her to train to become a researcher as well as expand research and bird conservation efforts in Honduras.