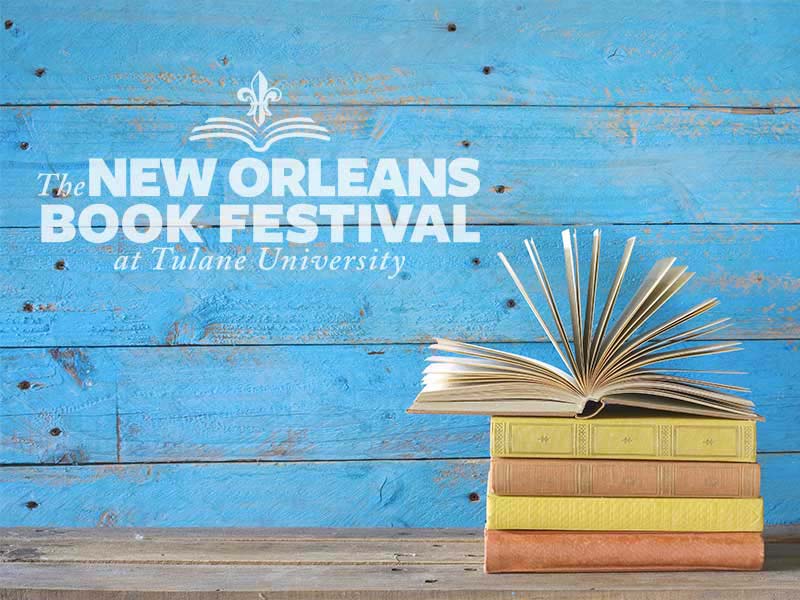 The 2021 New Orleans Book Festival at Tulane University, a new major literary event for the Crescent City, will feature a three-day (October 21-23), in-person literary celebration featuring more than 100 national, regional and local authors, including some of the nation’s most beloved bestsellers.

The 2021 New Orleans Book Festival at Tulane University will kick off its inaugural weekend, October 21-23, with a three-day, in-person literary celebration featuring more than 100 national, regional and local authors, including some of the nation’s most beloved bestsellers.

The festival is free and open to the public. However, there will be keynote author sessions where tickets are required. Ticket information for the keynote events will be released at a later date.

A new major literary event for the Crescent City, whose debut was postponed last year by the pandemic, the festival will feature panel discussions, moderated conversations, keynote lectures, book fairs, family programming and workshops. Each day will include at least one major plenary session, which will feature a leading author. The event will also provide a forum for media outlets, authors and readers to network and collaborate in one of the world’s most vibrant and culturally diverse cities.

“An important part of post-pandemic life at Tulane University will be welcoming the community back onto campus for major cultural events such as the New Orleans Book Festival.”

“An important part of post-pandemic life at Tulane University will be welcoming the community back onto campus for major cultural events such as the New Orleans Book Festival,” Tulane President Michael Fitts said. “We are thrilled to host such an impressive list of nationally acclaimed authors, many of whom are members of the Tulane and New Orleans community. It is an equal pleasure to welcome children and their families to campus for special programming designed just for our youngest readers.”

Family Day at the Festival, which will take place on Saturday, October 23, will focus on literacy advancement and feature readings and special literary-themed activities for the children of New Orleans and their families. Family Day is a partnership with the City of New Orleans’ Office of Youth and Families and the Scholastic Corporation, a global children’s publishing, education and media company.

The festival will engage with teachers and school organizations, as well as literacy, child advocacy and city partners, to encourage attendance and participation with the event. More details about family day and the children’s author line-up will be announced at a later date.

The festival co-chairs are former New Orleans First Lady Cheryl Landrieu and Walter Isaacson, the Leonard A. Lauder Professor of American History and Values in Tulane’s School of Liberal Arts and bestselling author. Landrieu is the co-founder of the New Orleans Book Festival and has a long history of supporting strategic community initiatives in New Orleans, most recently focused on literacy and advocacy for the advancement of women and girls.

Isaacson is the former CEO of the Aspen Institute, where he is now a Distinguished Fellow, and the former chairman of CNN and former editor of TIME magazine. He is currently an advisory partner at Perella Weinberg, a financial services firm based in New York City.

“The New Orleans Book Festival began in 2010 as a free literary event for families in New Orleans,” said Landrieu. “After a disappointing cancellation of the event in 2020, we are excited to expand in partnership with Tulane University to create a weekend of events featuring prominent national and local writers and journalists. The City of New Orleans has a strong literary history, and this festival seeks to continue and grow the literary community in our area. The partnership with Tulane will also generate participation of a great number of talented writers from the Tulane community and interest from Tulane students. The New Orleans Book Festival will offer something to readers of all ages and backgrounds and provide an opportunity for all members of our community to come together over a shared love of reading.”

“We are very excited to bring The New Orleans Book Festival at Tulane University to our great city for a three-day celebration of literacy and culture from some of the most notable local, regional and best-selling authors,” said Isaacson. “We have a fabulous and diverse lineup of authors from a vast array of genres and disciplines. Although we could not host our 2020 event, we are pleased that most authors are back for 2021. We hope to attract and captivate book enthusiasts of all ages from all over and make our festival one of the nation’s premier literary destinations.”

Additional authors for the book festival will be announced in the coming months.