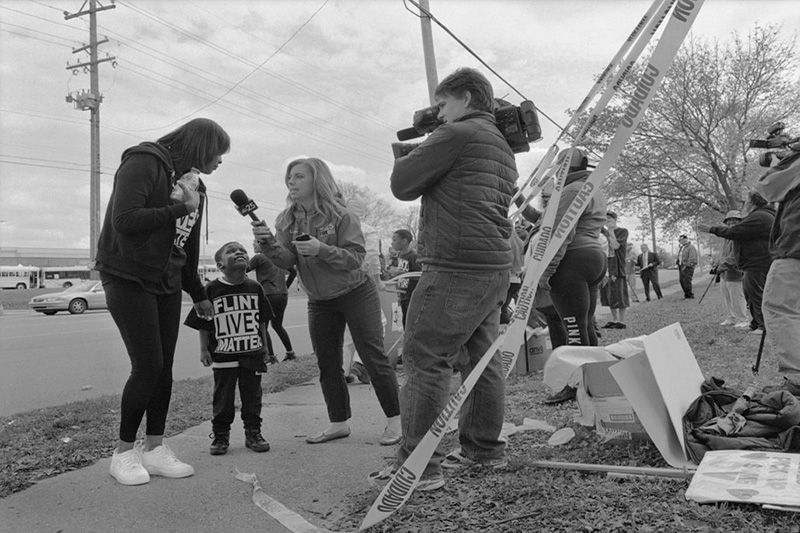 A mother and her son speak to a news reporter outside Northwestern High School in Flint, Michigan as they await the arrival of President Barack Obama on May 4th, 2016. (Photo by LaToya Ruby Frazier)

Two exhibitions that explore the experiences of communities impacted by pollution and its effect on health and environment open Aug. 21 at Newcomb Art Museum of Tulane University.

The exhibitions include LaToya Ruby Frazier: Flint is Family and The American Dream Denied: The New Orleans Residents of Gordon Plaza Seek Relocation. The latter is organized by Tulane students. Both exhibitions will run through Dec. 14, with an opening reception set for Sept. 5 and a free Family Day on Sept. 7.

The Flint exhibition features the work of artist, activist and MacArthur genius awardee LaToya Ruby Frazier, who spent five months living in Flint, Michigan, with three generations of women — poet Shea Cobb, her mother Renee and daughter Zion —observing their day-to-day lives as they endured one of the most devastating human-made, environmental tragedies in U.S. history: the lead contamination water crisis in their hometown.

"It is our hope that all who visit the museum this fall will engage with the stories told through the art and leave with a renewed understanding of the effects of environmental pollution on marginalized communities.”

In Flint is Family, Frazier explores the effects of the water crisis in Flint, where black residents make up 54% of the population and 40% of the population lives below the poverty line. By portraying the daily struggles of the Cobb family, Frazier used a tight focus to create a story about the impact of a systemic problem disproportionately affecting marginalized communities.

“Through photographs, videos and text I use my artwork as a platform to advocate for others, the oppressed, the disenfranchised,” Frazier said. “When I encounter an individual or family facing inequality, I create visibility through images and story-telling to expose the violation of their rights.”

Students in Tulane’s Critical Visualization and Media Lab (CVML), led by sociology and environmental studies professor Christopher Oliver, organized The American Dream Denied: The New Orleans Residents of Gordon Plaza Seek Relocation. They collaborated with residents of Gordon Plaza and representatives from the New Orleans People’s Assembly to showcase the impact of living among life-threatening pollution with limited access to resources and raise awareness of the environmental crisis facing contemporary Louisianans and New Orleanians.

In the 1980s, the City of New Orleans used funding from the U.S. Department of Housing and Urban Development to build the residential neighborhood Gordon Plaza in the Upper Ninth Ward on top of the Agriculture Street Landﬁll, a toxic waste dump that serviced the entire city for more than half a century.

“What was initially branded as a way for working class black and African American New Orleanians to access the American Dream of homeownership turned into a nightmare as the residual outcomes of living on top of a landﬁll began to effect the residents in real and adverse ways – often having deadly consequences for those living there,” Oliver said.

“We feel enslaved in our own homes,” said Shannon Rainey, one of the residents.

The exhibition – equal parts art show, social history, and critical visualization project – presents a chronological and visually engaging look at the residents’ ﬁght for a fully funded relocation with an emphasis on the role of women in activism, the effect on day-to-day living and the frustrations of the “promised” American Dream.

“By hosting the Louisiana premiere of Frazier’s work at the Newcomb Art Museum alongside an in-depth look at the issues facing the residents of Gordon Plaza, we are bringing meaningful, enriching and transformative exhibitions of socially-engaged art to Tulane and New Orleans,” said Monica Ramirez-Montagut, director of Newcomb Art Museum. “These exhibitions explore the concerns of communities both on and off campus, while recognizing underrepresented communities and the contributions of women to the ﬁeld.”

Admission to the museum is free and open to the public. More information on hours, events and programs can be found at Newcombartmuseum.tulane.edu or by calling 504-865-5328.