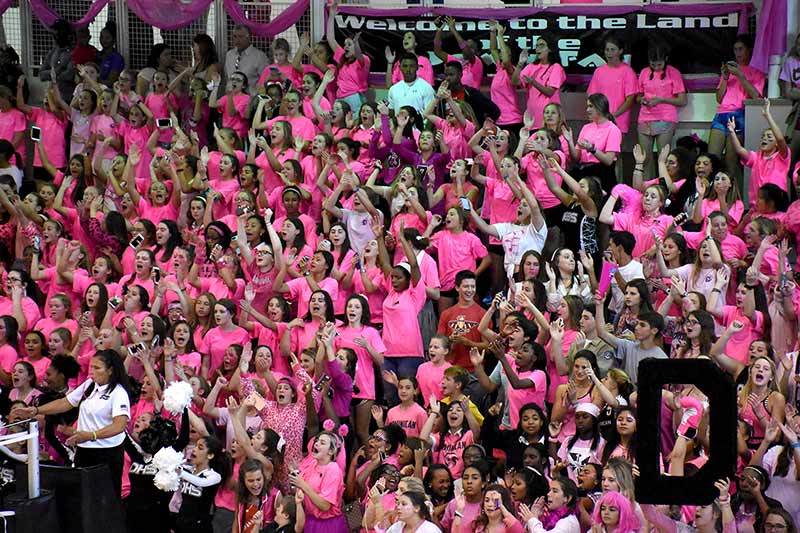 For many cancer patients, the strain to pay for rent, groceries, utilities or out-of-pocket medical costs can sap away energy just when they need it most.

That’s why local female student athletes — many from area Catholic high schools — raised over $40,000 this fall hosting volleyball tournaments to help patients cover everyday expenses so they can focus on fighting the disease.

Pink Games are a series of benefit volleyball games where athletes and spectators wear pink to honor women fighting breast cancer and those who have lost their battles.  Some schools incorporate ceremonies to honor family members or friends who have been diagnosed.

The funds will support patients through Tulane Cancer Center’s Patient Relief Fund, an important source of assistance for cancer patients facing financial burdens that could become barriers to their care.

The program helped stage-two breast cancer survivor Deneen McCormick-Phillips pay for transportation from Hammond to New Orleans for treatments, as well as prescription medications and other out-of-pocket medical expenses.

“The bills add up so quickly,” said McCormick-Phillips, who was dealing with the death of her son at the same time as her cancer diagnosis.  “This grant may not seem like a lot, but to me it was like receiving a million dollars.  It was an unexpected blessing that helped to sustain me for several months.  The students who helped to raise these funds should be applauded.  They didn’t even know me, but their efforts helped to uplift me at a very difficult time.  Thank you seems like too simple a phrase to express my appreciation.”

“I am truly amazed by the total amount of money that was raised this year,” said Pink Games Founder David Mocklin, head athletic trainer at Mount Carmel Academy and Tulane Institute of Sports Medicine. “We added another school to our core group and nearly every school had record totals this year. All of the credit goes to the student bodies, athletes, coaches, administrators, student council and parents at each of these schools. I am so happy that we are able to give back to the patients in our community who need help. We pray that these fundraising efforts will continue to impact the lives of cancer patients that continue to battle each day."

Learn more about how area female student athletes are making a difference in the lives of cancer patients in the following video featuring the 2016 "Pink Games" fundraiser.