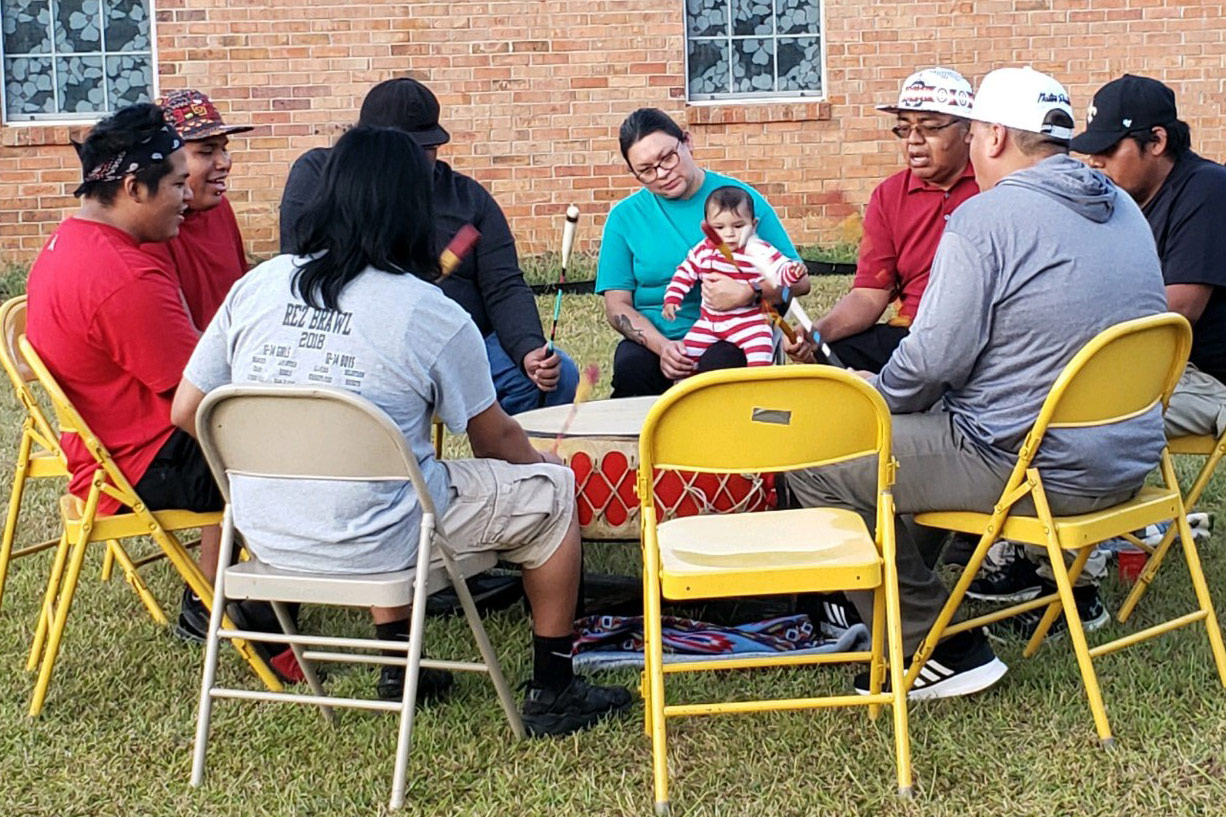 The Southern Pine Drum group performs for the final session of the Weaving Healthy Families Program in the pilot study that led to a $2.7 million study by the Tulane School of Social Work. Among those in the photo are members of the Community Advisory Board, Kathleen Ferris, center, and Dan Isaac, right. (Photo courtesy of Catherine McKinley)

As with all segments of society, substance abuse and domestic violence are major problems among Native American families. Now, thanks to a $2.7 million research grant from the National Institutes of Health, a professor in the Tulane School of Social Work is working to find interventions that will lead to a healthier, more resilient community.

Catherine McKinley, an associate professor, has been awarded the grant to study effective, sustainable, culturally relevant and family-centered interventions for substance abuse and violence among Native American families.

“Alcohol abuse is associated with many of the top causes of death among Native Americans as is violence —  both of which are also disproportionately high among these groups,” McKinley said. “They are associated with mental and physical health disparities that not only contribute to early death, but to an impaired quality of life.”

“This is a tremendous opportunity for Dr. McKinley and Tulane University to further promote individual family and community resilience. This work empowers people in their everyday lives.”

Patrick Bordnick, dean of the Tulane School of Social Work

The long-term goal of the research is to promote health, wellness and resilience while reducing alcohol and drug abuse and violence in Native American families. It will be based on the Weaving Healthy Family (WHF) curriculum, a cognitive-behavioral support group model tailored for all ages.

The title of the grant includes the words “Chukka Auchaffi’ Natana,” which translate to Weaving Healthy Families in the Choctaw language. McKinley said this is significant because it connects the research to those it serves.

The WHF program is different from current interventions because it integrates a culturally relevant talking circle into each session and infuses the Framework of Historical Oppression, Resilience and Transcendence into its approach.

“It was built from a decade of preliminary research that identified the culturally relevant risk and protective factors related to disparities of alcohol abuse, violence, and overall health and targets these factors to promote wellness and resilience,” McKinley said. “It contains a holistic approach to promote overall wellness using a medicine wheel, which includes physical, social, emotional/psychological and spiritual aspects.”

McKinley and her team will be working with Native American groups in the Southeast. The intervention will include ten 2½-hour sessions that include family meals during which families learn about health and wellness and age-appropriate breakout sessions that enable children and teens to learn about historical oppression, resilience, substance abuse prevention and anger management. Families will then reassemble to engage in fun and healthy activities that reinforce the skills they learned in the session.

A community advisory board leads the community-based participatory research, and a tribal community health representatives facilitate the WHF program. “It is important to have tribal practitioners train local leaders and practitioners and for sustainability and cultural-relevance, so that this program can persist beyond the funding period,”  McKinley said.

“Having an effective and sustainable program is important because, even if a program is effective, if it is not feasible or accessible it will not be utilized,” McKinley said.

McKinley is teaming up with an interdisciplinary group that includes Katherine P. Theall, a social epidemiologist with the Tulane School of Public Health and Tropical Medicine, and Charles Figley, director of the Tulane Trauma Institute.

The team also includes Karina Walters of the University of Washington School of Social Work, Dr. James Allen of the University of Minnesota Medical School and Leia Saltzman, an assistant professor with the Tulane School of Social Work. McKinley credited PhD social work students Jenn Miller Scarnato, Jessica Liddell and Hannah Knipp with assisting in the development of the intervention.

“This is a tremendous opportunity for Dr. McKinley and Tulane University to further promote individual, family and community resilience,” said Patrick Bordnick, dean of the Tulane School of Social Work. “Dr. McKinley is a top-tier behavioral scientist, and this work empowers people in their everyday lives.”

As part of treaty agreements with sovereign tribes, the U.S. government has a federal trust responsibility to provide for the health and well-being of Native Americans, McKinley said.
“Given the health inequities that have been imposed and perpetuated for centuries, this trust agreement has fallen short,” she said. “Government-supported research is important, not only to promote the health of Native Americans but to fulfill their treaty agreements to these communities.”