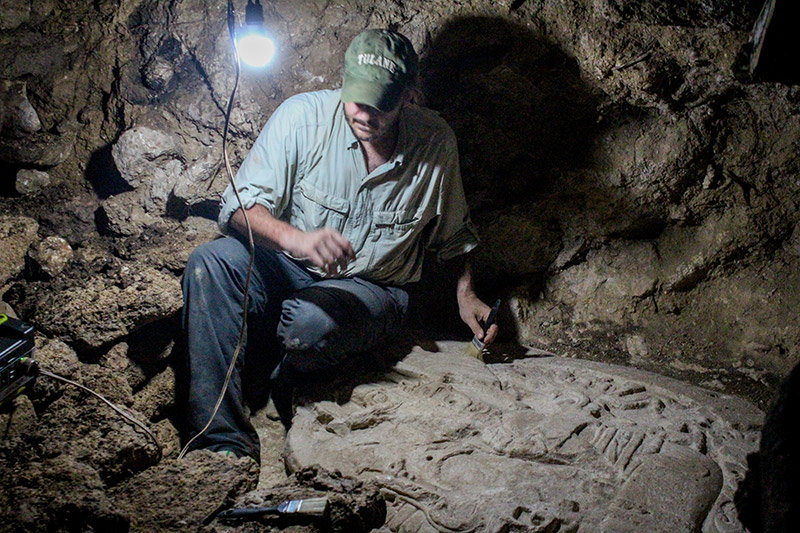 Tulane archaeologist Marcello A. Canuto sits beside the altar he and his team discovered in the jungles of northern Guatemala. (Photo courtesy of the National Museum of Archaeology and Ethnology in Guatemala City.

A team of archaeologists co-led by Tulane University professor Marcello A. Canuto has discovered a nearly 1,500-year-old carved altar at the Classic Maya site of La Corona, located in jungle forest of the Petén in northern Guatemala.

The discovery, announced Sept. 12, 2018 at the National Museum of Archaeology and Ethnology in Guatemala City, presents new evidence for how a powerful kingdom – known as Kaanul dynasty – began its two-century domination of much of the lowland Maya region.

“The discovery of this altar allows us to identify an entirely new king of La Corona who apparently had close political ties with the capital of the Kaanul kingdom, Dzibanche, and with the nearby city of El Peru-Waka,” said Canuto, director of the Middle American Research Institute at Tulane and co-director of the La Corona Regional Archaeological Project (PRALC).

"The discovery of this altar allows us to identify an entirely new king of La Corona."

The altar is made of limestone and displays the image of previously unknown king, Chak Took Ich’aak, carrying a double-headed serpent effigy from which the site’s patron gods emerge. It is accompanied by a column of hieroglyphs that record the end of a half-katun period in the Long Count Maya calendar corresponding to May 12, 544 AD.

“For several centuries during the Classic period, the Kaanul kings dominated much of the Maya Lowlands,” said Tomas Barrientos, co-director of the project and director of the Center for Archaeological and Anthropological Research at the University of the Valley of Guatemala. “This altar contains information about their early strategies of expansion, demonstrating that La Corona played an important role in the process from the beginning.

The team also included David Stuart, director of the Mesoamerica Center of the University of Texas at Austin along with Guatemalan archaeologists Maria Antonieta Cajas and Alejandro González.

Since 2008, Canuto and Barrientos have directed a multidisciplinary research program focused on the Maya city and involving archaeological excavation, hieroglyphic decipherment, regional settlement analysis using LiDAR imagery as well as a variety of chemical and material analyses. The PRALC will continue investigating the altar to better understand its importance and to define how the Kaanul kingdom came to exercise power over much of the Maya Lowlands.