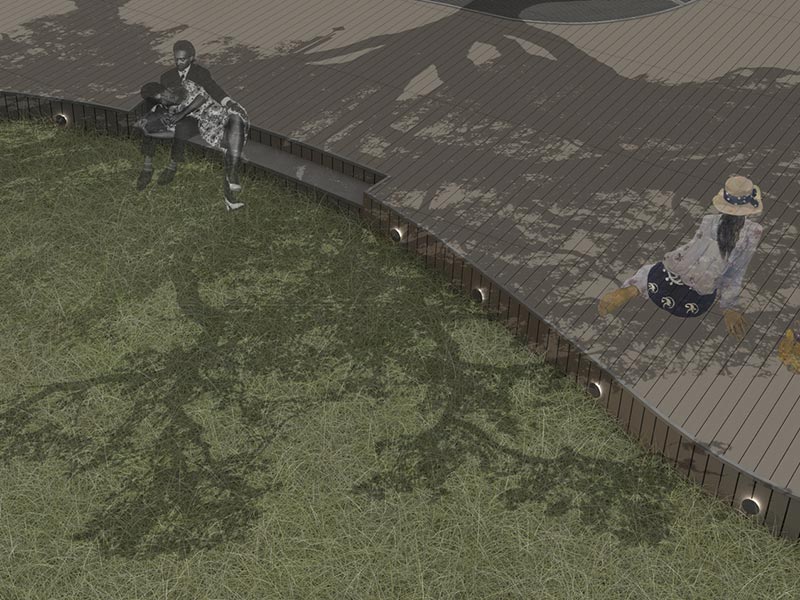 Mindful Shadow was designed by Théa Spring, who recently graduated with a master's degree from the Tulane School of Architecture. It features a wooden deck and a metal platform that lets visitors see through to the trunk’s base and its main roots.

The iconic Singing Oak at City Park is one step closer to seeing its surroundings enhanced and, more importantly, its roots protected. If such a project comes to fruition, Théa Spring, who recently received her master’s degree from the Tulane University School of Architecture, will get much of the credit.

Spring was recently named the winner of a competition launched by the Albert & Tina Small Center for Collaborative Design as part of its annual request for design proposals from local nonprofits. Concerned about the tree’s future, City Park asked for ideas on how to meet the needs of the ancient oak, while providing an aesthetically pleasing space for gatherings.

"The beauty of this competition was its modesty: design was needed to protect the tree’s roots, not redefine its surroundings. This was an evolution rather than a transformation.”

“When we were evaluating the designs, we had to consider fundraising, day-to-day maintenance and how it would serve the community programmatically,” said Casie Duplechain, chief development officer for City Park.

She said Mindful Shadow covered all the bases and is the most realistic of the proposals, depending on fundraising and its inclusion in City Park’s master plan.

Located on the shore of Big Lake near the intersection of Wisner Boulevard and Lelong Drive, the oak is one of the most popular and relaxing gathering spots in the park. Its wind chimes, including one that is 14 feet long, rings a pentatonic (five notes per octave) scale upon every breeze. The tree is so popular among visitors that the frequency of usage has damaged exposed roots. Park officials think a sitting deck, such as the one in Mindful Shadow, could help protect the roots and enhance the tree’s aesthetics.

"It is a great honor to have won this competition for City Park,” Spring said. “Visitors have enjoyed the Singing Oak for decades and for all kinds of activities, from the active to the contemplative, from the social to the solitary, and from morning till night. The beauty of this competition was its modesty: design was needed to protect the tree’s roots, not redefine its surroundings. This was an evolution rather than a transformation.”

Mindful Shadow is based on the idea of a second shadow but is actually a wooden deck constructed in wood tones similar to the oak’s trunk. One side is in line with the grass to allow for smooth access while the other side thickens to offer seating. It includes a metal platform that lets visitors see through to the trunk’s base and its main roots. It includes small round lamps that line the decks and appear as the sun goes down.

“The earth will be lightly illuminated to guide visitors, like a string a beads,” Spring said.

The project is estimated to cost $50,000, and Spring said she plans to be involved in its development. “I look forward to continuing this collaboration until we make it a reality,” she said.