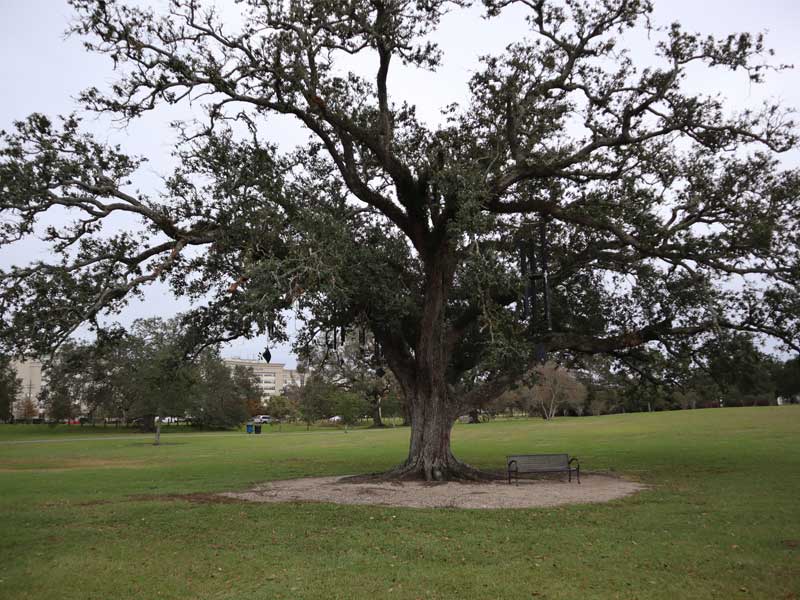 The Singing Oak at City Park is in need of a surrounding deck to protect its exposed roots. (Photo courtesy of the Tulane School of Architecture)

City Park calls its collection of 30,000 trees its most treasured asset, with some of the park’s storied oak trees dating back 750 to 900 years.

But none may be as beloved as the Singing Oak, which with its wind chimes — including one that is 14 feet long — rings a pentatonic (five notes per octave) scale upon every breeze.

Located adjacent to Big Lake near the intersection of Wisner Boulevard and Lelong Drive, the oak is one of the most popular and relaxing gathering spots in the park, but the frequency of usage has caused damaged to its exposed roots. Park officials think a sitting deck surrounding the tree could help protect the roots and enhance the tree’s aesthetics.

Enter the Tulane School of Architecture, which through the Albert & Tina Small Center for Collaborative Design, is offering to help. The Small Center chose the City Park project as part of its annual request for design proposals from local nonprofits.

“We have a long working relationship with City Park,” said Nick Jenisch, the Small Center’s project manager. “The park is a big supporter of our student designers, and the nature of the project really lent itself to a design competition.”

The Small Center launched such a competition at the end of the fall semester, and teams of students and faculty spent much of their winter break brainstorming ways to meet the needs of the ancient oak, while providing an aesthetically pleasing space for gatherings.

Under City Park’s requirements, the deck would have to be at least 250 square feet to properly cover the root system, grounded with an anchoring strategy that avoids damaging the roots and suitable to support small to medium gatherings. It would have to comply with the Americans with Disabilities Act (ADA) and not exceed $50,000 to build.

Tulane students transformed their ideas into designs, and a 10-person panel from City Park chose four finalists based on such factors as design, budget, feasibility and maintenance. City Park will select a winner during the first week of February. But before it does, it is seeking comments from the public. The survey, which will be open through Sunday, Jan. 31, includes each of the four designs below:

Mindful Shadow is based on the idea of a second shadow but is actually a wooden deck constructed in wood tones similar to the oak’s trunk. One side is in line with the grass to allow for smooth access while the other side thickens to offer seating. It includes a metal platform that lets visitors see through to the trunk’s base and its main roots.

Serenity Deck features a deck with a “gentle” slope to allow for various activities such as sitting, lounging, eating, doing yoga or wandering around. The circular area closest to the trunk will have a planter for more greenery, and adjacent to that will be a circular seating area around the trunk.

The Spot platform will be centered around the tree, with its shape inspired by the windchimes that hang from the branches. The main deck will be large enough to host such activities as impromptu musical performances and quiet meditation. It also features gravel paths to fit in with the existing pathways in the park.

The Living Deck is a network of habitable spaces that grow from key components of the site, offering a flexible spot for both human and plant life. The deck can be accessed from three main areas, and its highest and largest continuous space looks out onto Big Lake. Plantings will be woven into the deck to restore the compacted soil around the tree.

“We were looking for a variety of ideas over a short period of time, and the students came through,” Jensich said. “City Park was excited to see the designs, and they really want to hear from the public.”

In addition to public comments, City Park will select a winner based on budget considerations, park priorities and design preferences. The park will work with the winning design team towards implementing the project. The winning team will receive a “Day at City Park,” including visits to Café du Monde, City Putt and the Botanical Gardens.