The Tulane Innovation Institute will launch operations from its downtown headquarters later this year, thanks to several generous lead gifts from forward-thinking philanthropists. Like the nascent technologies and startups it seeks to invigorate, the multi-million-dollar, long-term project to transform the university’s entrepreneurial capabilities is attracting interest from expert investors who recognize its powerful potential.

The institute’s top mission will be to act as a combined technology and startup accelerator for university faculty, researchers, staff, and students as well as community members. As the institute’s primary engine, the Robert L. Priddy Innovation Lab will drive its commercialization efforts by providing proof-of-concept and early-stage startup gap funding for aspiring entrepreneurs and promising technologies. The lab also will provide a mentorship network featuring entrepreneurs-in-residence, de-risking expertise, and administrative, budgetary, marketing and branding support.

In partnership with the university’s existing academic units across disciplines, its second major focus will be on producing educational and experiential programming in order to energize and cultivate an innovative and entrepreneurial mindset and culture on campus that helps foster startup enterprises and technologies with commercial potential.

Its third priority, in concert with likeminded organizations across the city and region, will be to engage with and vitalize the innovation and startup communities in New Orleans, the state and the region. The institute will serve as a gathering place and strategic partner that offers support services and programming for their entrepreneurial endeavors.

The university is grateful to the Priddy Family Foundation for making the lead gift and securing the pivotal funds to launch the Robert L. Priddy Innovation Lab. A 1969 Tulane graduate, Robert Priddy forged a successful career in aviation and private equity and remains an active private investor, sitting on the boards of numerous companies in his portfolio. Along with Robert and his wife, Kikie, the foundation is run by their daughter and son-in-law, Shannon and Mike Acks, and their son, Christopher Priddy.

Another leading gift from Board of Tulane member David Mussafer (B ’85) and his wife, Marion, has established the David and Marion Mussafer Innovation Funds. The funds will support a spectrum of the institute’s activities, from programming and staff support to mentoring, marketing, and startup and proof-of-concept funding. In recognition of their gift, the institute’s managing executive will be known as the David and Marion Mussafer Chief Innovation and Entrepreneurship Officer, for which a national search is nearing completion. A renowned investor known for helping companies innovate, scale and achieve long-term, sustainable growth, David Mussafer serves as chairman and managing partner of Advent International Corp., one of the world’s largest and most experienced global private equity firms.

Although more philanthropic support is required to maximize impact, the project’s projected return on investment is large — and even more immense in unquantifiable ways. Once fully operational, the Priddy Innovation Lab will seek to invest in numerous proof-of-concept projects and startups by providing millions of dollars in grants and direct investment during the first five years of its commercialization push. Long term, it anticipates having an equity stake in dozens of startups and expects to attract more than $100 million in capital to the region.

“Throughout my career I’ve loved watching small ventures grow into thriving enterprises,” Robert Priddy said in explaining his gift. “In the Innovation Institute, I see a promising idea with the power to capitalize on Tulane’s existing strengths and grow into something huge for the city and the Gulf Coast. I’m captivated by this project’s possibilities and the opportunity to play a role in developing new concepts that can produce jobs, improve the local economy and change the world for the better. I’d recommend this project to anyone looking to invest in the future not only of Tulane but the entire region.”

With its initial headquarters planned at the ground level of Tulane’s new Thirteen15 residential development amidst a budding “Innovation District,” the institute is strategically situated to become a magnet for researchers and innovators not only from the university and the city but throughout the Gulf South. Its ultimate focus is to create a self-sustaining ecosystem that transforms talented minds into successful entrepreneurs. In doing so, it will help the city build a more diversified economy that includes technology, inventions and manufacturing alongside its shipping, tourism and hospitality elements. The institute will occupy leased space at the renewed Charity Hospital once its redevelopment is complete.

The institute will give Tulane an accelerator similar to those in place at peer institutions in the Association of American Universities (AAU). The Priddy Innovation Lab also will ensure that faculty and students across the university can more readily commercialize and monetize their ideas by providing crucial funding to nurture their startups until they are far enough along to generate revenue — thus avoiding the so-called “valley of death” that stymies countless new ventures. It will then create a pipeline of jobs for the approximately one-third of Tulane students who want to stay in the area after graduating but don’t because more lucrative opportunities lie elsewhere.

“For Tulane to have the Priddys’ and Mussafers’ generous support represents a resounding endorsement of this ambitious project,” Tulane President Michael Fitts said. “Robert and David both have an incredible track record for identifying and backing winning business plans, and the Innovation Institute will be a victory for all parties involved: Tulane, the city of New Orleans, the state and the region. I can’t thank the Priddys and Mussafers — and all our lead donors — enough for making this opportunity possible for Tulane. Now all we need is additional investment to bring this project to its fullest realization.”

Plans are shaping up for an advisory council formed by Tulane alumni, parents and friends around the world who are passionate about innovation and entrepreneurship. This group will bring ideas, mentorship, financial support and hard-earned lessons-learned to students, faculty and community members. A mentoring and consulting network is also being formed, whereby alumni, parents and friends of Tulane can volunteer their time and expertise to engage with the entrepreneurs utilizing the Innovation Institute.

In addition to collaborating with the university’s schools and college, the institute’s partners inside Tulane will include the Taylor Center, the Albert Lepage Center for Entrepreneurship and Innovation, the Scot Ackerman MakerSpace, the Office of Technology Transfer and Intellectual Property (which organizes the annual Tulane Novel Tech Challenge), and the Tulane National Primate Research Center.

Outside organizations also will be involved, from local entities such as The Idea Village (which produces the yearly New Orleans Entrepreneur Week) and the New Orleans BioInnovation Center to economic development groups around the state.

Complimenting university leaders for their vision, Mussafer sees Tulane as the absolutely perfect place to launch such an initiative.

“Given Tulane’s world-class reputation across multiple disciplines, along with its willingness to break down academic silos in order to create innovative solutions to important problems, the foundation for this project’s success is already well-established,” Mussafer said. “Factor in the city’s rich culture, diversity and magnetic allure for creative individuals, and you have a powerful recipe for impactful entrepreneurship. Marion and I are thrilled to be a part of this work.”

The symbiotic relationship between Tulane and New Orleans positions the Innovation Institute to have far-reaching impact. Not only will it serve as a catalyst to bring new technologies to market, but it will be a magnet for talent and capital. The institute has the opportunity to contribute to significant expansion of diversified industries and exponentially grow New Orleans —economically, financially and socially. It will heighten the already experienced entrepreneurial spirit of this region and fortify the infrastructure necessary for it to grow and thrive. And with 40 percent of Tulane graduates remaining in the New Orleans area after graduation, this initiative could chart a course for them — and other local college and university graduates — to start and build their careers here. 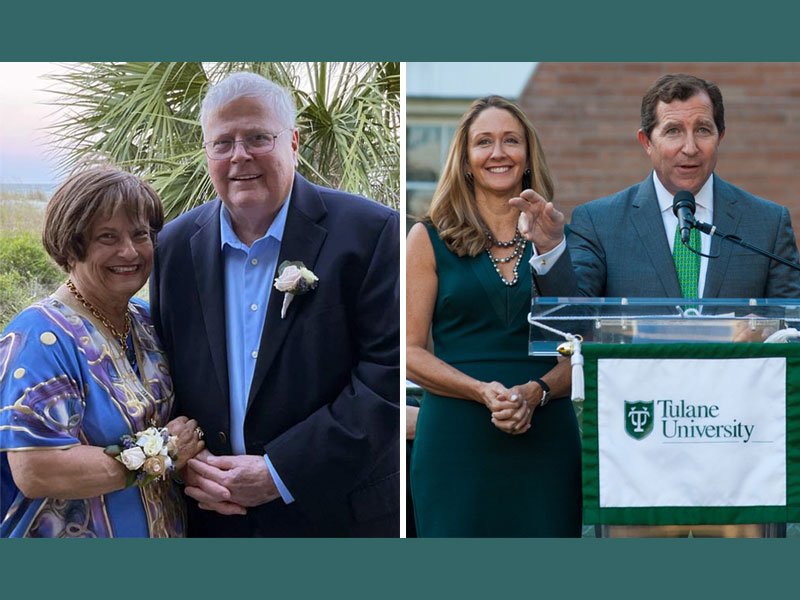