A Tulane internship of seismic proportions 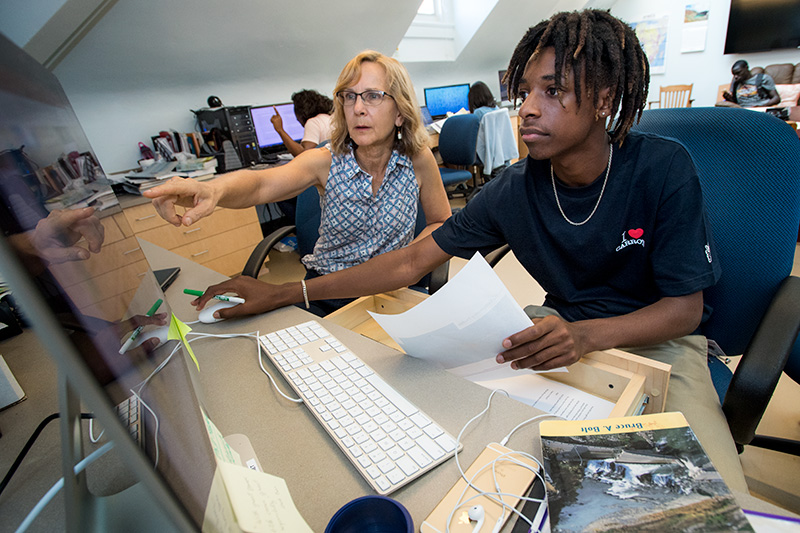 Professor Cynthia Ebinger, left, and Makiyah Cormick, a senior at the New Orleans Charter Science and Mathematics High School and a laboratory aide in the Geophysics & Active Tectonics Lab (GATR), discuss his research into the Comoro Islands earthquake cluster, which began in May 2018. (Photo by Paula Burch-Celentano)

As a research intern in the Tulane School of Science and Engineering, Makiyah Cormick, a senior at the New Orleans Charter Science and Mathematics High School, worked closely with scientists to analyze seismic data from around the world.

He was especially interested in the possible causes of an earthquake swarm on Comoros, a volcanic chain off the eastern coast of Africa, in May and June 2018.

“The Comoros Islands are part of the East African rift system, but little is known of faulting and volcanism in this part of the rift,” Cormick said.

“I had an amazing time interning at Tulane. I never thought I’d learn as much as I did in such a short amount of time.”

Based on weeks of research that involved daily analysis of earthquakes recorded by National Earthquake Information Center, calculations and comparisons, and analysis of the temporal and spatial patterns of the earthquakes, he was able to conclude that the swarm was not a result of a fault slip as previously suspected but rather an eruption or intrusion on the eastern flank of Mayotte Island, which is part of the chain.

Cormick, 17, submitted an abstract of his research to the special session of the American Geophysical Union meeting in December in Washington, D.C. He was one of 110 secondary-school students worldwide to submit an abstract to the Bright STaRS program, which provides a forum for students to present their research results to the scientific community. Cormick was the only student to be awarded a travel grant for him and a chaperone to attend the meeting.

“I hope to meet a ton of great people who know a lot about the topic I’ve chosen to study,” said Cormick. “I also wish to see how others have been able to link geophysics and computer science together.”

Cynthia Ebinger, the Marshall-Heape Chair Professor in the Department of Earth and Environmental Science, said she could not have been more impressed with Cormick’s dedication.

“He used his growing analytical skills to map unusual earthquake patterns emerging from global networks,” she said. “Our entire lab group benefited from Makiyah’s enthusiasm and curiosity-driven approach to problem-solving.”

Cormick hopes to attend Howard University and major in computer science, eventually pursuing a career in software development. He credits his time at Tulane with guiding him on his path into the real world.

“I had an amazing time interning at Tulane,” he said. “I never thought I’d learn as much as I did in such a short amount of time.”