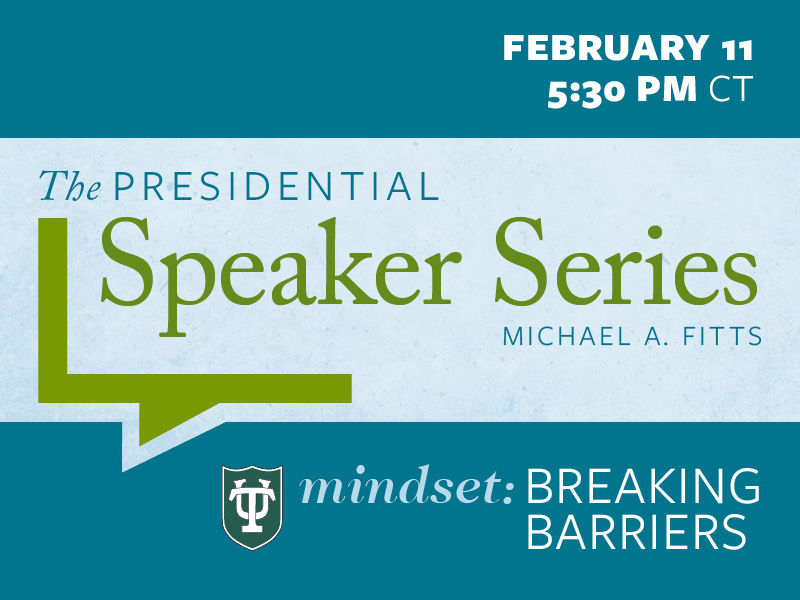 Tulane University President Michael Fitts will host the third installment of the Presidential Speaker Series — Mindset: Breaking Barriers — via Zoom on Thursday, Feb. 11 from 5:30 to 6:30 p.m.

The program will feature Lisa Jackson, vice president of Environment, Policy and Social Initiatives at Apple, and Col. Douglas G. Hurley, a NASA astronaut and Spacecraft Commander on the first crewed test flight of the SpaceX Crew Dragon. Both are Tulane alumni, with Jackson (E ’83) holding a bachelor of science degree in chemical engineering and Hurley (E ’88) a bachelor of science degree in civil engineering.

The event is free, but registration is required. Please click here to register.

“These two distinguished Tulanians are pioneers in their fields. Throughout their lives and careers, Lisa and Doug have broken barriers, confronted adversity, and forged unique paths,” said Tulane University President Michael Fitts. “They exemplify the goals of a Tulane education: improving the human condition and building a better world. I am grateful that they are sharing their experiences with the Tulane family.”

In 2009, she was appointed by President Barack Obama to serve as Administrator of the U.S. Environmental Protection Agency. As head of the agency, she focused on reducing greenhouse gases, protecting air and water quality, preventing exposure to toxic contamination, and expanding outreach to communities on environmental issues.

In addition to her degree from Tulane, she holds a master’s degree in chemical engineering from Princeton University. A member of the Board of Tulane and the School of Science and Engineering Board of Advisors, Jackson is the recipient of the 2019 Distinguished Alumni Award.

Hurley launched into space as the commander of NASA’s SpaceX Demo-2 mission in 2020. The flight marked the return of crewed launches to American soil following the space shuttle program retirement, and it was the fifth time in U.S. history that NASA astronauts have flown on a new spacecraft. During his 62 days at the International Space Station, Hurley contributed to more than 110 hours of time to supporting the orbiting laboratory’s investigations and supported four spacewalks as the robotics operator and intravehicular officer.

He currently serves on the Board of Advisors for the Tulane School of Science and Engineering and is an alumnus of Tulane ROTC. He was named a NASA astronaut in 2000 and previously served as a fighter pilot and a test pilot in the U.S. Marine Corps. He was also winner of the Distinguished Alumni Award in 2015.