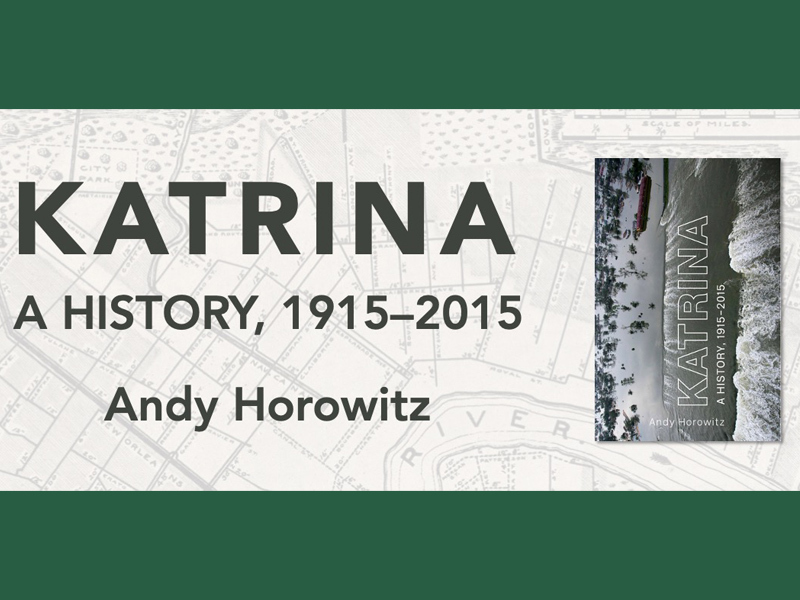 Tulane scholar Andy Horowitz, an expert on the history of disasters, has been studying Hurricane Katrina for many years. His book was published a month before the storm's 15th anniversary in 2020.

A Tulane University scholar’s book on Hurricane Katrina has been named the Humanities Book of the Year by the Louisiana Endowment for the Humanities (LEH).

Andy Horowitz, an assistant professor of history, is the author of “Katrina: A History, 1915-2015” (Harvard University Press), which takes an in-depth look at one of America’s most destructive disasters.

The Humanities Book of the Year “best exemplifies scholarship on Louisiana topics by Louisiana writers,” according to the LEH.

“The work of a historian is telling other people’s stories,” said Horowitz, who holds the Paul and Debra Gibbons Professorship in the Tulane School of Liberal Arts. “It is particularly moving to be recognized by some of the people whose stories I tried to tell in my book. The Louisiana Endowment for the Humanities does such important work, and I am very grateful to them.”

The LEH Humanities Awards, now in their 36th year, celebrate and honor those who have made great contributions to the understanding of Louisiana’s history and culture. Horowitz and the other winners will be highlighted in the spring issue of 64 Parishes magazine, published by the LEH. They will be recognized at the Bright Lights Awards ceremony when public health conditions  allow for safe gatherings.

In his book, Horowitz goes back to 1915 to help explain the Katrina disaster’s causes and consequences – looking beyond the Aug. 29, 2005 storm itself to understand why nearly 80 percent of New Orleans flooded and tens of thousands of people never returned to the city. It was in 1915 that the city began developing the neighborhoods that ultimately flooded in 2005.

Published just over a month before the 15th anniversary of Katrina, the book is divided into two parts — the first part covering 1915 to Hurricane Katrina, and the second part covering the flood and the following decade. It includes everything from the growth of the twentieth century city and suburbs to the levee failures and “inept” rescue operation, to calls for New Orleans to be abandoned and a series of racist attacks on African Americans during the flood. It also traces the development and implementation of policies that reshaped the greater New Orleans area after the storm.

“Fifteen years after the flood, I thought it was time for a historian’s assessment: to write about it with the perspective that time and distance affords, and to try to figure out what were Katrina’s most significant causes and consequences,” Horowitz said.

For more information on the LEH awards, click here.