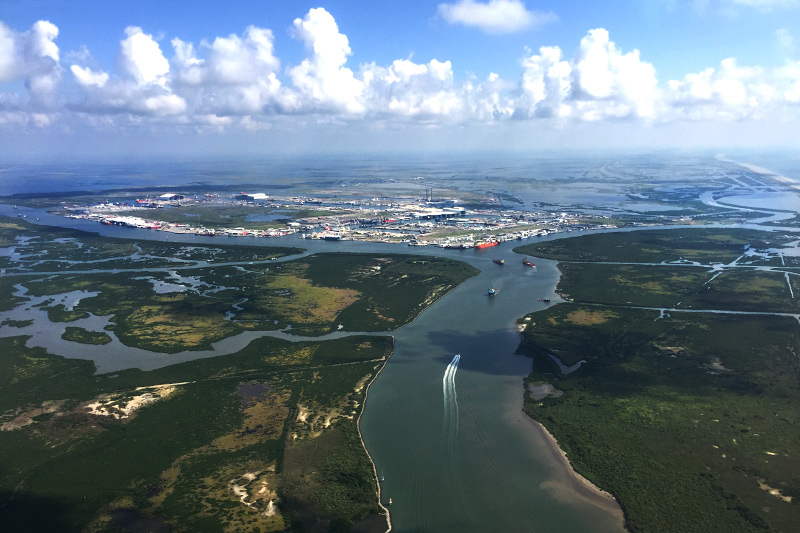 Port Fouchon, in southern Lafourche Parish along the Gulf of Mexico, is one of the largest oil and gas ports in the nation and is considered ground zero for sea-level rise. (Photo by Alex Kolker and Southwings)

A national report released Wednesday on the future of the Gulf Coast draws heavily on the work of two Tulane University scientists who have spent most of their careers studying coastal systems in Louisiana and around the world.

The report from the National Academies of Sciences, Engineering and Medicine calls for improved understanding of the Gulf Coast system to promote resilience of coastal communities and ecosystems under rapidly changing environmental conditions, such as sea-level rise, flooding, marsh and wetland loss and subsidence.

The committee that drew up the report included researchers from around the country, including two from Tulane — Vokes Geology Professor Torbjörn Törqvist and adjunct professor Alex Kolker.

“The next step is to try and engage both the research community and the funders of the research so that we can implement a lot of the science recommendations.”

•    How coastal landforms and coastal ecosystems along the Gulf Coast will respond to rapidly changing conditions (both natural and human-induced), given the expectation for continued sea-level rise acceleration.

•    How residents and businesses along the Gulf Coast will respond to evolving coastal landforms and ecosystems under rapidly changing conditions.

•    How improved understanding of the Gulf Coast's coupled natural-human system can be applied to decision-making at the local, state and regional levels.

“Because of the long-term changes that we’ve experienced in the Gulf and that are expected to continue as sea level rises, now is the time to think about long-term plans as to how the physical system and human system are likely to evolve together,” said Kolker, who is also an associate professor with the Louisiana Universities Marine Consortium.

The report recommends that the GRP create an integrated research program that focuses on understanding the evolution of the coupled coastal system. The program should support collaborative, multidisciplinary research teams and deliver easily accessible observational data and model results, the report says.

Such an effort has the potential to positively transform living along the Gulf Coast and in coastal zones around the world by informing decisions from local to federal levels, says the report.

“The next step is to try and engage both the research community and the funders of the research so that we can implement a lot of the science recommendations,” Kolker said.